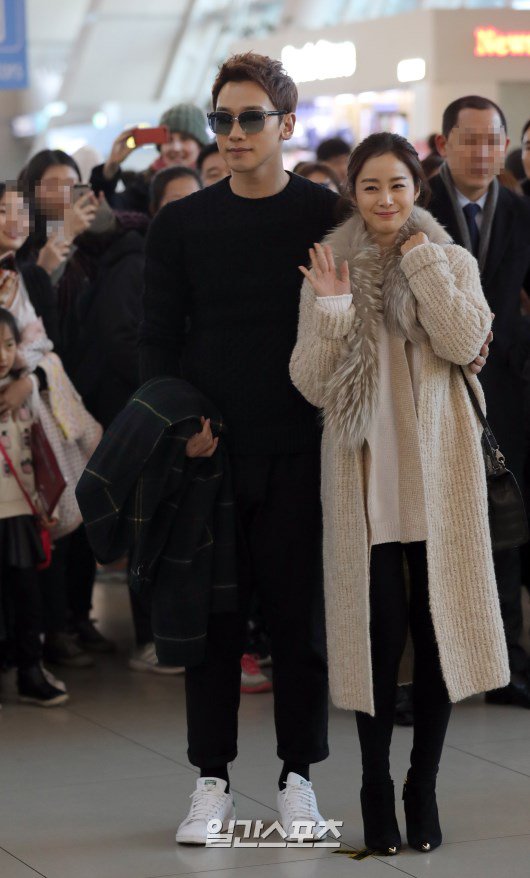 The two headed for Incheon International Airport to Bali on the 22nd. Many thought they would leave for Bali in secret as they had their wedding under complete secrecy but they didn't. They stood right in front of the reporters.

They appeared holding hands and said, "Thank you. We will be happy together". Then they headed for the departure hall.

They were smiling the whole time. Rain escorted her all the while and watching them was like a scene from a movie.

It was a Sunday but the airport was filled with tourists. Attention drew to the reporters who were waiting for Rain and Kim Tae-hee to arrive.

Kim Tae-hee and Rain got married on January 19 after 5 years of being together. They got married in a cathedral in Seoul with just the closest family and friends. The security around the cathedral was intense. The location and time of the wedding was notified to guests and family at 11AM in the morning. It was like a 007 mission. Park Jin-young performed for the love birds and Ahn Sung-ki acted as the witness of the wedding. Lee Honey received the bouquet.

The reason they had such a secret wedding was in consideration of the instable country at the moment. Rain revealed a letter on the 17th saying, "I am ready to become a husband and a father. She's always been there next to me without a doubt and the trust and loyalty has led us to getting married. The country is very instable and messy right now so we want to keep it as minimal as possible. I apologize for not having said this sooner".

After the ceremony, Kim Tae-hee wrote a letter and posted, "Thank you for everyone's blessing. We promise to be a good couple".

"Kim Tae-hee and Rain en route honeymoon"
by HanCinema is licensed under a Creative Commons Attribution-Share Alike 3.0 Unported License.
Based on a work from this source