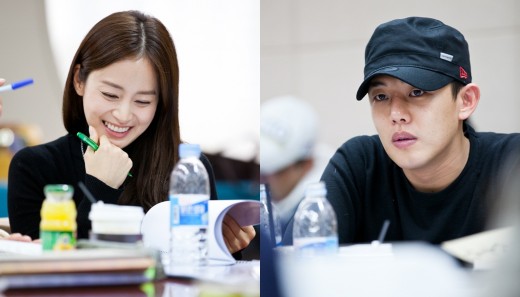 Behind cuts of Kim Tae-hee and Yoo Ah-in at the script reading of Jang Ok-jeong were revealed.

Kim Tae-hee and Yoo Ah-in showed up wearing black. They both take on the role of Jang Ok-jeong and Sook Jong.

Kim Tae-hee is smiling brightly in the picture and Yoo Ah-in is staring at something with charisma in his eyes.

Kim Tae-hee and Yoo Ah-in's visual is what catches the eye. The reading started early morning but Kim Tae-hee seemed as clear as anything. Yoo Ah-in's attitude was also different from others.

Staff from the drama are highly anticipating to see how the two will turn out to be like in the real drama.

Meanwhile, "Jang Ok-jeong Lives in Love" is based on the concept of a fashion designer in the Joseon Times. This is a different version of the Jang Ok-jeong many know of. To be aired in April after "Yawang".

"Kim Tae-hee and Yoo Ah-in in matching looks at script reading"
by HanCinema is licensed under a Creative Commons Attribution-Share Alike 3.0 Unported License.
Based on a work from this source