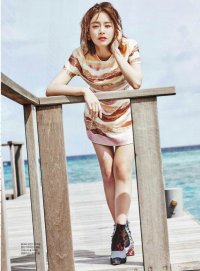 When people think of Kim Tae-hee, they often say she is beautiful but her acting still has a long way to go. Her perceived shortcomings in acting have been constantly talked about while she worked to be recognized as a true actor than a graduate of the elite Seoul National University. Can "Fight" ("Venus and Mars"),her new film opening on Dec. 13, change all that? The Chosun Ilbo met her to find out.

People say you have improved but still many say your acting is amateur.

In the past, I didn't even realize I was bad. I was too busy. And even when I saw my shortcomings, I simply turned away. But about two or three months ago, I bought the DVDs for 'Love Story in Harvard' (Kim's 2004 TV soap) and I was so embarrassed. Sure, I was sincere and I put in a lot of energy into it, but I simply wasn't ready technically".

Are you satisfied now?

I feel I have gotten better. Of course, I still have a long way to go.

How do you feel when people criticize your acting on the Internet?

I get frustrated and angry to the point of not wanting to live anymore. But at the same time, something inside me refuses to accept those comments and drives me to work harder to get recognition one day".

Why do you have to act with all these people attacking you? You could lead a comfortable life by just shooting commercials.

When people are faced with something new and challenging, they get excited. In the past, acting was like a tough homework assignment, and I didn't get any joy or sense of achievement from it. But these days, I feel I know what it is like to act and I think I'll be truly happy when I become a great actress".

Why did you choose the character in the film? She's a divorcee and Sol Kyung-gu, who plays her ex-husband, is 12 years older.

Many people were against me doing this film too, asking why I'm trying to play a character who's older than me. But the truth is, it's hard to draw a stereotypical image of a divorcee or a married woman in Korea any more. They all look really young now. As for Seol, he felt more like a friend than any other actors that I had filmed with. I don't know why, but the whole female crew liked him too".

When frustrated, your character Jin-a puts on a purple wig and cries her eyes out, while Seol's character Sang-min, a cleanliness freak, scrubs the bathtub. What does the purple wig signify?

I think it means hope. Reality bites, but the wig, in a surreal way, talks of future hope.

What do you do when you feel empty? Do you also cry like Jin-a?

I rely on my friends. I get lonely really easily and I can never overcome that by myself. But I want to be strong and independent one day.

Do you feel you were able to become one with the character?

I never intentionally tried to fall in love for the sake of gaining pointers for my acting, but experience did help. Of course, I never had the experience of marrying someone, and then hating the person once the fantasy is over. But I'm sure we all had similar experiences. Falling in love, I think, is crucial for acting.

What's wrong with having confidence in yourself? I think every woman needs to be narcissistic to some degree. Women become more confident when they are beautiful, feminine, and adorable. As for being shrewd, I'm not because I simply haven't had enough experience of life. In fact, there are certain things that people want to believe of me that are not true at all. Anyway, it hurts me to hear those comments.

Some say you approach acting intellectually, like a subject for study, rather than really feeling it.

What makes an actor? A senior professional told me that an actor is an actor because he has to learn constantly. I admit I want compliments like the ones I got in my schooldays. When we were shooting "Fight", Seol told me that it's really good to see me enjoying every moment of acting. He said he gets too sensitive and feels a lot of pressure. People think I'm always rational, but that's not true".