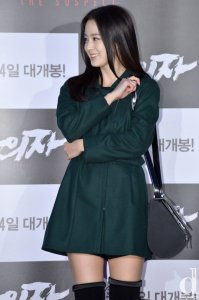 Actress Kim Tae-hee first spoke about the rumor surrounding her relationship with the son of a giant conglomerate. She appeared on Sunday's Park Joong-hoon Show aired by KBS and candidly addressed the rumor.

She said, "In the beginning, I thought the rumor would soon disappear, since it was not true. However, it spread uncontrollably and became established as fact. I didn't take any active measures because I didn't know it would become this serious. And I waited because if I made a fuss, I thought the rumor might snowball".

She also added, "My agency selectively sued netizens who spread the malicious rumor, but dropped it later because the police investigation confirmed it to be untrue. Also they were not the ones who started the rumor in the first place".

She also spoke about the controversy surrounding her acting skills. She has been spotlighted as a model in commercials but has so far failed to prove her appeal in other fields. When asked about this, she said, "That's because I haven't yet been able to show interesting sides of myself in other works. I was confident and comfortable shooting commercials because they are relatively easy, but dramas and movies require more skills and the burden has prevented me from doing better".

However, she also showed her passion as an actress saying, "I am still developing and becoming more confident. I will never stop pursuing acting as long as the viewers allow me to. As I live the lives of others and try to find things inside me to express genuine emotions, I become increasingly thirsty to act".