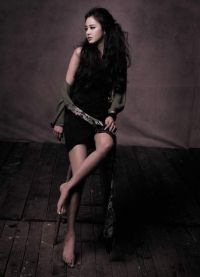 Actress Kim Tae-hee will make her first TV appearance in four years. According to Kim's management agency, the actress was recently cast as the heroine of a new drama series entitled "IRIS". She will star in the 20-part action drama alongside Lee Byung-hun. Renowned film director Kang Je-gyu will direct the drama series while screen writer Choi Wan-gyoo will be in charge of the screenplay.

IRIS will be Lee's first drama appearance in five years since "All In". The two actors will take on the role of special government agents that handle terrorist attacks.

The drama series is slated for broadcast next summer. The shooting will begin once casting has been completed.