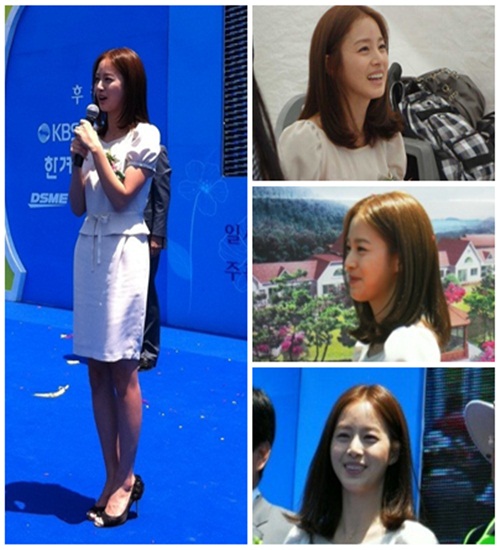 Recently on an online bulletin came up a picture if Kim Tae-hee in Sorok Island.

In the picture is Kim Tae-hee standing on stage under the hot sun smiling continuously and signing autographs for people as if it was her fan autograph signing session.

On a phone call with News N, her management revealed, "Kim Tae-hee visited Sorok Island in celebration of the 8th Hansen Family Day. She took pictures with and signed autographs for the sick people and wanted to give them positive support".

According to her management she attended the groundbreaking ceremony of the building of "Daewoo Seaside Hope Village" in Jeon-nam Goheung-gun Sorok Island. As she has been active as an ambassador for the "Make a Wish" foundation for children with incurable diseases since 2005, she usually likes giving attention to the sick children and taking care of them.

Her management said, "She decided she will attend the event as soon as she got the request from the National Sorok Island Hospital. She also happened to have a free day".

They continued, "The Hansen disease is not infective but this fact has been misunderstood by many. Kim Tae-hee wanted to let people know. She usually doesn't like to reveal this kind of event to the media but this time she thought as much as it's an isolated matter, she should".

Those who have seen the picture say, "We can't hate her. She's a beautiful actress", "Her heart is as pretty as her face", "The picture is shining...I'm jealous of everything", "I wannabe her. You're so cool" and more, applauding her good heart.

"Kim Tae-hee secretly does good deed in Sorok Island"
by HanCinema is licensed under a Creative Commons Attribution-Share Alike 3.0 Unported License.
Based on a work from this source