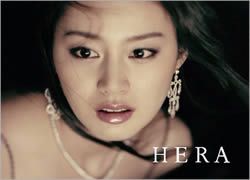 
Kim Tae-hee, who has cultivated a clean, innocent image, is all mystery and sensuality in a new commercial for the Amore Pacific cosmetics line Hera. The spot shows the actress looking seductive against a backdrop of an old castle, the gothic streets of Catalonia, and an exotic jazz bar in Barcelona. There were reportedly concerns whether Kim's innocent girl image would clash with the brand's sensual image. But Kim's intelligent sensuality comes to the fore with a new big hairstyle and smoky eye make-up.

The commercial consists of three episodes, with the second and the third to be aired in April and September. Each episode has an independent story line, but all three also tell a continuing story.