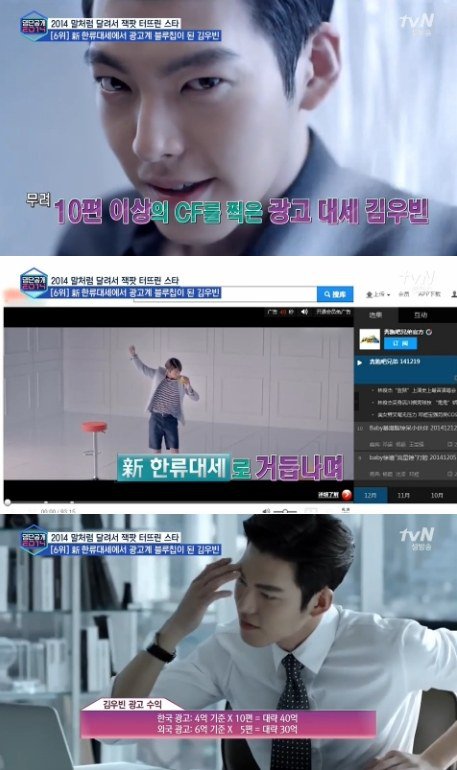 Kim Woo-bin is estimated to have earned 8.6 million won this year.

Kim Woo-bin came in as the 6th star who hit the jackpot this year.

Kim is currently a hot Hallyu star with his outstanding performances in "Friends 2" and "The Heirs" last year. His Asian tour fan meeting proves his popularity.

The entry fee to a Hallyu star's fan meeting in the Chinese region ranges from 120 ~ 140 thousand won. However, Kim Woo-bin's 7 fan meetings were sold out in 5 minutes. 12,700 fans paid roughly 1.6 billion won to see Kim Woo-bin.

This is not the only jackpot he hit. He filmed over 10 commercials and 5 alone overseas. Kim Woo-bin makes 400 million to 450 million won per ad and more than 600 million overseas. That's a total of 7 billion won this year alone.

Kim Woo-bin is also coming out with a movie called "The Con Artists" on the 24th.

Meanwhile, other stars who hit the jackpot this year was also revealed.

"Kim Woo-bin earned 8.6 billion this year"
by HanCinema is licensed under a Creative Commons Attribution-Share Alike 3.0 Unported License.
Based on a work from this source