Kim Woo-bin Unfazed by Great Expectations for Sequel to 'Friend' 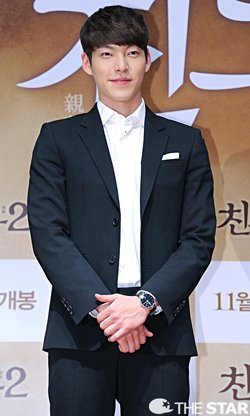 "Friends 2", a sequel to the 2001 film "Friend" is set to be released some 12 years after the original became one of the country's biggest-ever box-office hits.

Rookie actor Kim Woo-bin will make his film debut in director Kwak Kyung-taek's new action movie, which is due to hit theaters here next month.

When asked how he managed to cope with the pressure of working alongside some of the biggest names in Korean cinema like Yoo Oh-sung and Joo Jin-mo, he said, "Many people thought it would be quite a challenge for me, but it was actually very easy to get on with them because we're all guys".

"Friend" has cast such a long shadow that it is still hailed as a major milestone in Korean cinema and was remade as the TV drama "Friend, Our Story" in 2009. As such, appearing in the sequel automatically heaps significant pressure on any actor.

Rather than being intimidated by the high expectations, however, Kim said he did not hesitate to jump at the opportunity. "I loved this film and it remains one of my favorites. So when the script came along, I didn't have to think twice", he said.

"I'm not worried about that. If the film or drama has a good script, I can sympathize with the character and the message that the writer or director wants to convey", he said. "As an actor, creating different characters is just part of the job".

"While the original appealed mostly to a male audience by highlighting friendship among male friends, the sequel focuses on the story of a family, so I think it will have a broader appeal", he added.