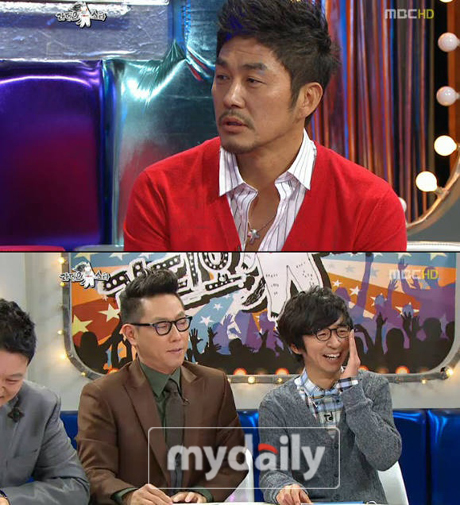 Actor Kim Young-ho revealed the most suitable bed scenes for the MC's of "Radio Star".

Kim Young-ho appeared on the MBC TV program "Radio Star" on the 23rd and conveyed his views of the most suitable bed scene for MC's Yoon Jong-shin, Kim Gook-jin, Kim Gu-ra and Kyu-hyeon.

When he mentioned that he gave up the movie "Friend" for another movie that had a bed scene in it, the MC's asked him to say what bed scene image they are.

He said, "Kim Gu-ra is a typical Jo Hyung-ki bed scene style. Kyu-hyeon is a sweet and romantic type".

He told Yoon Jong-shin, "Rather than a bed scene, you are more the peeping Tom type" to which Kim Gu-ra replied, "He's more of a attic or study room person when it comes to shooting something too".

Finally, Kim Young-ho made a connection with the appearing guests and the MC's as he said, "Kim Gook-jin seems to be talking about his bed scene he took 20 years ago".

Meanwhile, Kim Young-ho explained about the conflict he had with singer Yim Jae-beom through media and how they became sworn brothers.

"Kim Young-ho, "Kim Gu-ra is the typical Jo Hyung-ki bed scene style""
by HanCinema is licensed under a Creative Commons Attribution-Share Alike 3.0 Unported License.
Based on a work from this source