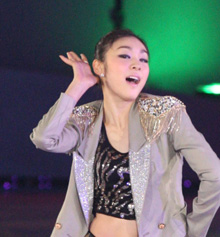 Olympic figure skating champion Kim Yu-na hosts an ice show "All That Skate Spring 2012" at a rink at Olympic Park's Gymnasium in Seoul for three days from Friday.

Kim will skate to Canadian singer Michael Bublé's "All of Me" as a finale of the first act before the intermission. She will be dressed as a man and use props such as a hat. In the second act, she will unveil a new gala program to "Someone Like You" by British pop star Adele.

An ice-based acrobatic show will be staged for the first time in Korea during the performance. A team of male ice acrobats from Russia will perform somersaults and other acrobatic feats while skating. MBC will broadcast Sunday's show live from 4:10 p.m.