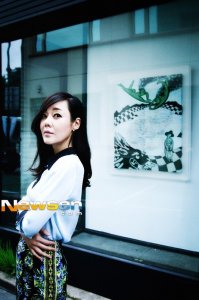 Kim Yunjin won the Best Actress award for her role in the film "Seven Days", a story of a child abduction, at the Annual Daejong Film Awards held Friday at the COEX Convention Hall. Kim beat out Jeon Do-yeon who has won eight best actress awards at home and abroad so far, including one for her part in "Secret Sunshine" at the prestigious Cannes Film Festival last year.

Filled with emotion, Kim could barely speak as she accepted the award onstage. "I'm stunned to receive this award", she said. "I'm honored to have been nominated along with Jeon and the other actresses. This award is on behalf of all the staff and crew of "Seven Days". I thank director Won Shin-yun, who lied to me that I was the only actress to take on the role". She thanked all the staff and colleagues by name and lastly dedicated the prize to her mother.

Kim also won at the Saturn Awards in the U.S. and the Asian Actress award at the Taipei Golden Horse Film Festival for her role in the hit U.S. TV series "Lost". In 2002 she won the Best Actress prize at Korea's Blue Dragon Awards for her work in "Ardor".

Meanwhile, "The Chaser", the number one Korean blockbuster so far this year, drawing five million moviegoers, was the day's top winner with six awards, including Best Film, Best Director and Best Actor.