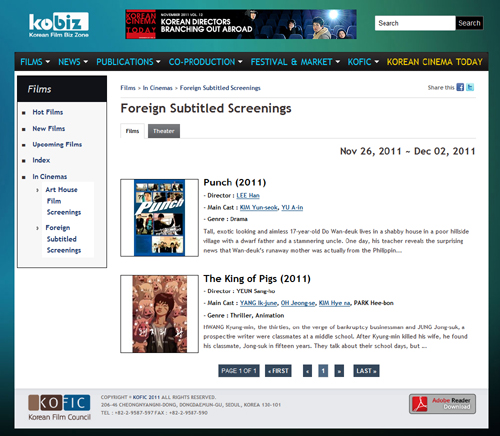 This week, the Korean Film Council (KOFIC) is launching a service to provide listings for subtitled Korean film screenings and arthouse screenings on its Korean Film Biz Zone (KoBiz) website (www.koreanfilm.or.kr).
Aimed at helping foreigners in Korea experience local cinema, the subtitled screenings' times and venues can be found through the following link: http://www.koreanfilm.or.kr/jsp/schedule/subtitMovie.jsp. Alternately, you can go to the KoBiz website at www.koreanfilm.or.kr, click on "Films" on the left-hand side of the menu bar, then "In Cinemas" and "Foreign Subtitled Screenings". The "Art House Film Screenings" can also be found under the "In Cinemas" title.

The first film on the subtitled screenings list is the box office hit "Punch", directed by Lee Han. Currently at the top of the box office, the film stars Kim Yun-seok ("The Yellow Sea") as a high school teacher who helps his next-door neighbor and pupil, played by Yoo Ah-in ("Antique"), to get through his issues.

The independent film made its premiere at the Busan International Film Festival (BIFF) and has gained word of mouth to take in over 4.2 million admissions since its release Oct. 20.

Punch is screening with English subtitles in four different theaters in Seoul.

The second subtitled film on the site is the animated feature thriller "King of Pigs" directed by Yeon Sang-ho. The film's voice acting cast most notably features Yang Ik-june, the director and star of "Breathless", Oh Jung-se from the feature films "Couples" and "Petty Romance", as well as Kim Hye-na from "Cafe Noir" and "Flower Island".

The King of Pigs also made its debut at the Busan film festival where it garnered much critical attention and picked up the Network for the Promotion of Asian Cinema (NETPAC) Award as well as the Directors Guild of Korea (DGK) Award for best directing.

"KOFIC launches subtitled and arthouse film screening listings"
by HanCinema is licensed under a Creative Commons Attribution-Share Alike 3.0 Unported License.
Based on a work from this source