KOFIC to open first and largest umbrella stand in Busan 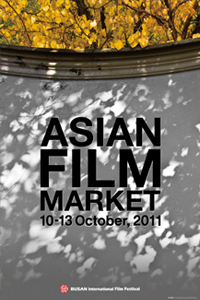 At the upcoming Asian Film Market held during the 16th Busan International Film Festival (BIFF), the Korean Film Council (KOFIC) is planning to open its first Busan umbrella stand with 12 companies. This will make it the largest stand KOFIC has ever opened at Busan.

"Originally we have umbrella stands at overseas markets such as Hong Kong, Shanghai and Berlin, but this is the first time KOFIC is opening a stand with other companies in Busan. This is because the Asian Film Market is moving to the BEXCO this year, and we want to add support to their having the BIFCOM and Asian Film Market all under one roof", says Yoon-hyung JEON, Europe & PR Manager at KOFIC's International Promotion Center.

"Also, of the 12 companies in the stand, seven are post-production houses whose technology and skills we can display abroad and bring in overseas work. These companies will also be showing promotional footage they have done, for example, from Bong Joon-ho's "The Host" and Tsui HARK's Detective Dee", adds Jeon.

"Most established film sales companies open their own sales booths at Busan, but we want to support smaller independent films and their agents, too", explains Jeon.

Both sales companies and post-production houses will get independent booth space within the umbrella stand.

Visitors will also be able to visit the KOFIC stand to find out more and have meetings about locations incentives, international co-productions and other Korean film-related matters.

KOFIC is also planning to hold a Korean Film Night reception on Oct. 9 at the Paradise Hotel. (Invitation only.)

"KOFIC to open first and largest umbrella stand in Busan"
by HanCinema is licensed under a Creative Commons Attribution-Share Alike 3.0 Unported License.
Based on a work from this source