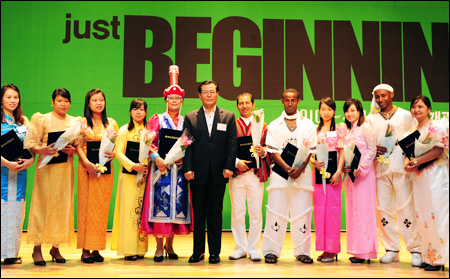 Park Dae-won, chairman of the Korea International Cooperation Agency (KOICA), awarded certificates to 11 migrant women and workers from developing countries that have received grants from the aid agency.

The 11 include Phon Vanh from Laos, G. Gina from the Philippines, Hean Senghour from Cambodia and Ho Thi Quyen from Vietnam.

As volunteer KOICA public relations officers, these people will share their expertise in their countries for the KOICA Global Village, an exhibition center located in southern Seoul, according to the aid organization.

The center was set up and opened last year to showcase food, culture and other programs from developing nations that receive aid from KOICA.

In a speech on the one-year anniversary of the Global Village, Park said since the opening of the center, it has played a key role in raising awareness of aid recipient countries among Koreans.

"The Global Village's diverse showcase of food, culture and hands-on programs has helped visitors and the general public have a better understanding of development assistance and realize why we need to help these nations", Park said. "I hope more people can learn more about these nations and aid programs through the village".

Over the past year, the Global Village held three exhibitions on Mongolia, Africa and Latin America.

These events and other programs have drawn an estimated 25,000 people, including pre-school and elementary school students.

The visitors learn how to make food from developing countries and tasted it.