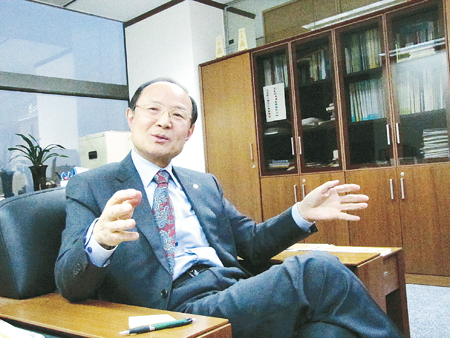 Korea-Arab Society Secretary-General Choi Seung-hoh discusses the role of the foundation he has headed since 2008 during an interview with The Korea Times at his office in southern Seoul, Feb. 28. / Korea Times photo by Philip Iglauer

Although Korea and the Arab world have had links through the Silk Road for more than 1,000 years, in modern times, they have been restricted to the Arab construction boom in the 1970s and '80s and, more recently, to Korea's energy dependency on Middle East oil.

A joint partnership led by a retired Korean diplomat is working to change all that.

"When we talk about the Middle East or Arab world, we think only of construction or oil, but I insisted that it is time to launch a dialogue on culture, on institutions and on history, because without those discussions we cannot expect to be good friends", said Korea-Arab Society Secretary-General Choi Seung-hoh in an interview with The Korea Times at the foundation's offices in southern Seoul on Feb. 28.

The Korean government and some 22 Arab nations, as well as a host of private companies and organizations, launched the Korea-Arab Society to broaden economic ties and also push the relationship into cultural areas, people-to-people exchanges and beyond

The society is Choi's brainchild. During a presidential visit by Roh Mu-hyun in Egypt in March 2006, Choi approached him with the idea of upgrading Korea-Arab relations to a level above Korean construction investment and Middle East oil exports.

The society's three objectives include enhancing mutual awareness and understanding of cultures and traditions of Korea and the Arab world by promoting cooperation and exchanges, promoting friendly and cooperative relations between Korea and Arab nations, contributing to expanding economic relations by creating more private sector economic and trade opportunities.

"The number of cultural and people to people exchanges has been greater in the last four years than what we had in the last 40 years", Choi said.

The society organized the 4th Korea-Arab Friendship Caravan in October 2011 and the Arab Cultural Festival in Jun 2011. It hosts workshops, seminars, lectures and discussions inviting high-ranking officials and academics.

It will also organize a Korea International Tourism Exhibition in June and have a Korea-Arab Society Pavilion at the Yeosu Expo through July 10 with 13 nations participating with booths.

Choi said former foreign ministers, Ban Ki-moon and Song Min-soon, deserve some of credit, too, for cultivating his idea of a Korea Arab Society.

The creation of a foundation, Choi said, aimed at lifting previously neglected areas of Korea's relationship with the Arab world, is in line with the diversification of Korea's foreign policy in general.

Choi was a career diplomat with seven postings in six countries, but since August 2008, he has dedicated himself to building cultural bridges between Arab nations and Korea.

His first impression of an Arab country was in his second posting abroad in 1982 at in Qatar.

He also had the chance to work in, Egypt as his country's ambassador from 2004-2006. Choi worked to have "Autumn in my Heart" become the first Korean drama to air in the Middle East in the Autumn of 2004. "Winter Sonata" aired next in 2005 and became a huge hit among Egyptians.

He also secured the first Korean studies department in the Middle East, which opened at Ain Shams University in 2005.

"Korea-Arab Society actively builds up cultural bridges"
by HanCinema is licensed under a Creative Commons Attribution-Share Alike 3.0 Unported License.
Based on a work from this source