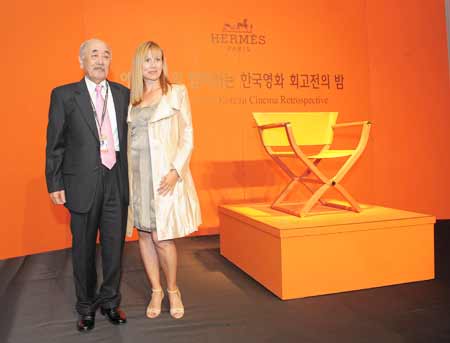 BUSAN - Arts and entertainment have the power to bridge distant cultures, and Korea has been enjoying creative exchanges with the Czech Republic.

Yet such ties between the two countries date farther back. In the late 1990s, when Korean cinema was virtually unknown in international circles, the Karlovy Vary International Film Festival played a pivotal role in introducing contemporary films in Europe.

"Karlovy Vary was one of the first major European film festivals to feature a strong lineup of Korean films in the 1990s", said Julietta Sichel, who had served as program director of the Czech event. "It's wonderful how it seems that what began mostly as an exchange in the film sector expanded to other fields of art".

Sichel was in town as a guest at the 16th Busan International Film Festival (BIFF) - not to watch countless films back-to-back as a programmer but to enjoy the event as a recipient of this year's Korean Cinema Award. The honor recognizes individuals who have made significant contributions in promoting Korean cinema to the global community.

Her relationship with Korea began in 1999, when she was invited to the inaugural BIFF.

"I knew about classic Korean films like works by Im Kwon-taek because I studied film history, but visiting Busan really allowed me to establish lasting friendships with Korean filmmakers", she recalled. "I was so warmly received in Busan and I really believe in personal ties. Korea really has the most amazing filmmakers and cineastes with such wonderful hearts".

The same year a Korean delegation including esteemed director Lee Chang-dong and BIFF's founding director Kim Dong-ho visited Karlovy Vary. Lee's "Peppermint Candy" was also invited to compete at the festival. "I was very happy with the positive reaction that cinephiles, film critics and jury members had to 'Peppermint Candy'," she said.

And so in 2001, Sichel organized the New Korean Cinema Retrospective at the Czech event. It was the first of its kind at a major European film event. A decade down the road, Jay Jeon, the deputy director of BIFF, was decorated by the Czech Republic's Ministry of Foreign Affairs for promoting ties between the film industries of the two countries.

When asked what makes Korean films so special, she summed it up simply - "energy".

"I feel that Koreans in general have so much energy. They have so much enthusiasm about everything and are keen to introduce new things and innovations. And so, even some of the slowest, most meditative Korean movies have some kind of energy".

She said that BIFF's growth into Asia's largest film festival comes as no surprise, since she has seen the changes over the years as she visited almost every year. Sichel noted however how it was a little regretful that small restaurants by the Haeundae Beach area that she had been fond of are disappearing one after another.

How does she view see the outlook for Korean cinema? "In the future I think there will be a lot of influence by technical possibilities. There will continue to be low-budget films but also complicated movies that use new media like 3D to tell stories".

In the meantime Sichel has left the Karlovy Vary Festival to face new challenges as a producer for films such as "8 Heads of Madness". The upcoming feature is directed by Marta Novakova, who saw the international premiere of her 2006 film "Marta" at the 11th BIFF.

The 16th BIFF continues through Friday. For more information on the festival visit www.biff.kr.

"Korea-Czech ties strengthening through cinema "
by HanCinema is licensed under a Creative Commons Attribution-Share Alike 3.0 Unported License.
Based on a work from this source