Korea Full of Tigers A Century Ago 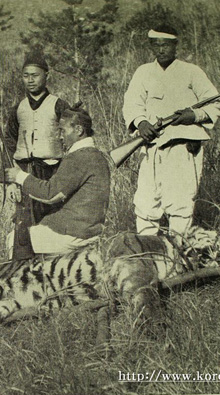 Local Korean hunters pose in front of a tiger hunted by them and an English sportsman Ford G. Barclay on the island of Jindo in South Korea's South Jeolla Province in 1903.

"Even on the southern remote islands of the Korean Peninsula were filled with lots of Siberian tigers a century or so ago", argued Prof. Lee Hang of the Seoul National University in a press release on Feb. 19, 2012.

He showed to the local Korean press two photos of Korean tigers (Siberian or Amur tigers) caught by the hunters as evidences.

The tiger photos were from the article "The Manchurian Tiger" authored by Ford G. Barclay, which were written in a book "The Big Game of Asia and North America: The Gun at Home and Abroad".

The book was co-authored by Ford G. Barclay and was published in London in 1915.

"The Manchurian Tiger" shows the details on how the Siberian tigers were populated on the Korean Peninsula and on how they were hunted in early 20th century.

Prof. Lee said that the book showed that there were four tigers on Jindo Island some 500 meters off the south western tip of the Korean Peninsula.

Now, the island is connected to the mainland by the Jindo Bridge. 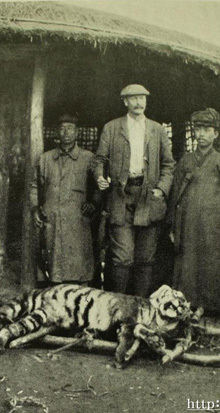 An English sportsman Ford G. Barclay poses with his local Korean hunters in front of a tiger hunted by them in Mokpo in South Korea's South Jeolla Province.This undated fild photo was taken in 1903.

"This means that Korean tigers were populated in the peninsula and even on the corners of the isolated islands only a century ago", Prof. Lee said. "Also this proves that tigers are good swimmers"

According to the book, an adult male and female tigers were hunted by the local hunters on Jindo Island.

Mr. Barclay and the local hunters chased the other two tigers on the island for about 10 days but failed to find them.

On the beach they only found the footsteps of the tigers which were printed toward the mainland.

They thought the tigers fled to the land by crossing the sea, but three weeks later they found the tigers' footsteps again.

Mr. Barclay's records also say that legends also depict the popular existence of the tigers on the island and other islands south of the Korean Peninsula some 100 years ago.

Another Seoul National University professor, Kim Dong-Jin, who is a member of the fund, said that tigers were common even in the coastal areas and many islands of Korea.

"History books records a number of cases in which people were attacked by the tigers in the past", Prof. Kim said.

He said that many national farms had to be moved from the mainland to the island to avoid the danger of tiger attack, but even on the islands tigers appeared frequently.

He argued that the national troops were mobilized
for the tiger hunts on the islands.

It was 1922 that the last tiger was seen and hunted on Mt. Daedeuk in Gyeongju, South Korea's North Gyeongsang Province.

Recently, a research team of the Seoul National University released a report saying that Korean tigers have the same DNA with the Siberian tigers.

The following story is part of "The Manchurian Tiger" authored by Ford G. Barclay.

My own most successful hunts have been inthe island of Chindo, some thirty miles as the crow flies south-east of the open port of Mokpo, situated at the south-west corner of Korea. It is separated from the mainland by a channel between two and three miles wide, through which the current rushes at such a rate that it is only possible to cross in a large boat for thirty minutes or so at each turn of the tide, and yet tiger most readily face this fierce tide pretty frequently.

The island is about the size of The Isle of Wight, and there being very little cover on it when snow is on the villager that authentic news of fresh tiger tracks will be liberally rewarded. On one visit I was greeted with the intelligence that four tigers were there, a male and female of fair size, and two three-year-old females.

The first two I secured a day or two later, the other two broke back through the beaters in a drive some twelve miles from the nearest part of the channel. The next morning their tracks were reported in the tidal mud, heading across the straits for the mainland, but being still skeptical as to tiger facing such a swim in the depth of winter I continued my hunt for ten days, during which no freshtracks were seen.

Three weeks later news of another pair in the island led me back, but though we jumped one I never actually saw more than the footprints. A week later these two were also tracked over the mud towards the straits and mainland. Early this year (1914) the body of a tiger was washed up on.