Korea Gets its First White Christmas in 10 Years 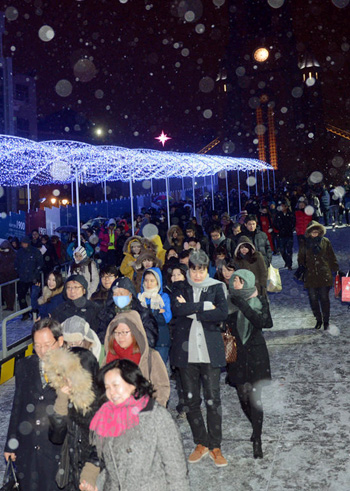 Pedestrians walk in snow on the eve of Christmas in Myeong-dong, Seoul on Monday. /Newsis

Korea is enjoying its first White Christmas in 10 years, as a light powdery coating of dust falls on the capital this morning.
The snow has been falling since Monday night, and according to the Korea Meteorological Administration, the capital region can expect to see up to 3 centimeters of snow by the end of the day.
The temperature in Seoul is currently hovering below minus 6 degrees Celsius and is expected to stay that way throughout the day.
Around the nation, temperatures are expected to range from minus 6 degrees Celsius in Gyeonggi and Gangwon Provinces in the north to 6 degrees on Jeju Island in the south.
The snowfall is expected to continue on and off throughout the day until Tuesday morning.

"Korea Gets its First White Christmas in 10 Years"
by HanCinema is licensed under a Creative Commons Attribution-Share Alike 3.0 Unported License.
Based on a work from this source