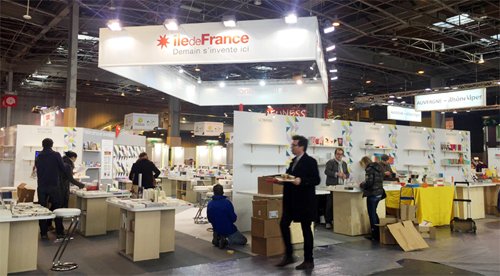 Participants at the Paris Book Fair organize their booths at the Paris Expo Porte de Versailles on Wednesday. /Courtesy of Korea Publishers Association

Korea is taking part as the guest of honor in the 36th Paris Book Fair, which opens in the French capital on Thursday, as the two nations celebrate the 130th anniversary of diplomatic ties this year.

Thirty Korean writers were invited to the event to show various aspects of Korean literary culture.

French President Francois Hollande attended the eve of the fair on Wednesday.

Korean authors will be involved in over 40 cross-reading events with French authors throughout the four-day festival.

Gibert Joseph, one of the most notable bookstores in central Paris, will display and sell over 10,000 copies of 2,000 different Korean books translated into French to celebrate the event.

The Paris Book Fair features over 1,500 publishing companies from 55 countries. Over 250,000 people visited the event last year. Unlike the London Book Fair, a trade exhibition limited to those working in or associated to the publishing industry, the Paris Book Fair is open to everyone. This is partly why the organizers invited many Korean children's book authors and comic book writers.

"Korea Honored at Paris Book Fair"
by HanCinema is licensed under a Creative Commons Attribution-Share Alike 3.0 Unported License.
Based on a work from this source