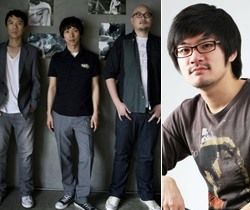 Jang Ki-ha and trio bank My Sister's Barbershop have won the most awards at the sixth Korea Music Awards. At the award ceremony held in Daehakro in Seoul, Jang received three awards  the best song of the year for funky "Cheap Coffee", the best rock of the year, and netizen's choice of best male musician of the year.

Jang was all teary, as he went up to the stage to receive his awards. He thanked the awards organizers and fans for giving such honor to an inadequate and not so pleasant song. He also said that lots of good music is expected from independent musicians this year.

My Sister's Barbershop was also a triple crown winner. The trio's fifth album, "The Most Ordinary Being", won the year's best album, the best modern rock album, and the best song titles. The underground band thanked the fans for supporting them, and urged people to buy more music CDs.

Other award recipients include Taeyang of Big Bang, W & Whale, and Yoo Hee-yeol of Toy. The ceremony was hosted by rocker Yoon Do-hyun and actress Lee Ha-na.