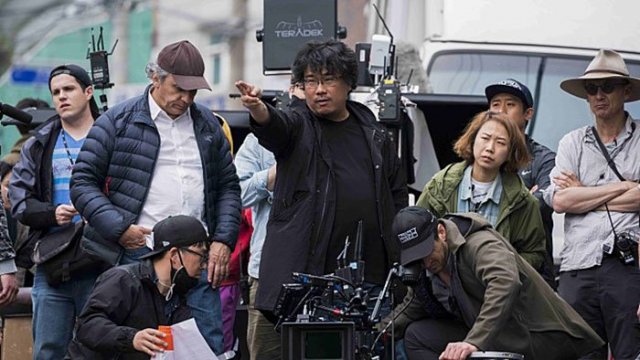 Movie theater chain CGV on Tuesday decided to deny screen space to "Okja", which is directed by Bong Joon-ho and produced by Netflix.

CGV on Friday said Netflix's insistence on releasing the co-production simultaneously both in theaters and online "will disturb the entire distribution system in Korea". The theater chain had threatened to boycott the film unless it could get a theatrical release first.

CGV, which owns 39 percent of all movie theaters in Korea, will also show no trailer for the film, whose star-studded cast includes Hollywood A-listers Tilda Swinton and Jake Gyllenhaal alongside Korean actress Ahn Seo-hyun. The theater chain said trailers for a movie not being shown on its screens could "confuse" viewers.

Netflix boasts 98 million subscribers and earned US8.8 billion last year. It spent $50 million on "Okja", which can be streamed on Netflix starting June 29.

A CGV staffer said, "There has to be prior consultations about a movie's release, but Netflix unilaterally set the rules and demanded that we follow them".

Industry watchers say it is inevitable that movies are being released via wider platforms, including the Internet and TV. But so far Netflix has produced very few Korean films.

One movie producer said, "Due to the emergence of online services, the production landscape has diversified, which is good. But it is a bit disappointing to see movies being treated the same way as any other streaming media content without considering the unique nature of theatrical experience".

NEW, the company handling the distribution of "Okja", now has to reorganize of its premiere and marketing events, though a last-minute compromise with CGV could still be on the cards.

Film critic Jeon Chan-il said CGV's attempt to protect its interests is selfish. "The rights of moviegoers to see the film in a theater are not being considered", he said. "The biggest problem is that moviegoers lose out in the fight between Netflix and CGV".

The director and cast of "Okja" will turn up for a red-carpet event in Seoul on June 13 and a press conference the following day. The film premiered amid similar controversy at Cannes last month.

"Korea's Biggest Theater Chain Boycotts Netflix's 'Okja'"
by HanCinema is licensed under a Creative Commons Attribution-Share Alike 3.0 Unported License.
Based on a work from this source