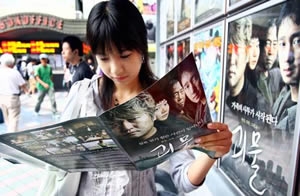 A young woman reads a pamphlet about the sci-fi film The Host in front of a movie house in central Seoul on Friday (July 28), the first day of its screening. The big-budget film, directed by Bong Joon-ho, tells the story of a family who tries to save their daughter abducted by a mutant monster that lurks in the Han River.

The movie attracted an estimated 449,000 people across the country on Friday. The film's production budget is 11 billion won ($11.5 million), and one third of it was spent for the creation of the monster, aided by the staff from the "Harry Potter" and "The Lord of Rings" series.

"Korea's first sci-fi film opens"
by HanCinema is licensed under a Creative Commons Attribution-Share Alike 3.0 Unported License.
Based on a work from this source