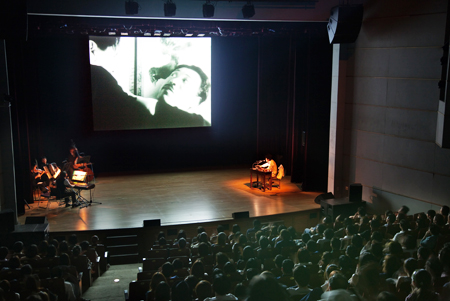 As the black and white film began rolling, a four-piece band - keyboard, violin, cello and piano accordion - played music and a narrator explained the first scene of the film "Crossroads of Youth" at Ewha Centennial Hall located in Jeong-dong, central Seoul, Saturday.

The silent film was revived with a modern twist after enormous effort from staff including a programmer, a director, a composer, musicians, singers and a narrator.

Though the picture was grainy, audiences were absorbed in the melodramatic story of Yeong-bok, Gye-sun, Yeong-ok and Gae-cheol in Seoul during the 1930s.The film was accompanied by a live music performance.

Seasoned actor Cho Hee-bong sat at a small desk with a light on stage left and narrated the movie entertainingly. He was the "byeonsa", or silent-film narrator, who reads lines, gives background information and even provides sound effects such as cows mooing.

Noted musical actors Yang Joon-mo, who played the Phantom in the Korean production of "The Phantom of the Opera", and Lim Moon-hee, whose credits include the Beggar Woman in "Sweeney Todd", sang the songs. Dressed like the characters in the movie, they appeared onstage to sing songs at critical moments to lift the atmosphere.

The audience burst into laughter when Cho commented on "obscene camerawork" as the lenses lingered over the body of an actress from head to toe and immersed in Yang and Lim's songs expressing anger and love. 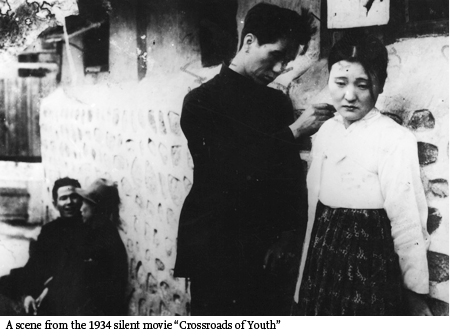 Directed by Ahn Jong-hwa, "Crossroads of Youth" is the oldest surviving film in Korea. Originally released in 1934, the film was found by the Korean Film Archive in 2007 and registered as a Modern Cultural Property in March. Saturday's screening was part of events remembering "Daehan Jeguk", or the Korean Empire (1897-1910), hosted by the Cultural Heritage Administration.

However, the process of reviving a silent film from 1934 was not easy. When the movie was first found, it was just rolls of unedited negative film, Kim said.

"We had to watch the film over and over again hundreds of times to edit it. At first, we couldn't even distinguish who was the protagonist and who was the antagonist. A few lines of summary in an old newspaper helped us understand the movie", the director said. "So the currently screened version of 'Crossroads of Youth' could be different from the 1934 original".

"There is a thin line between the film and performance in 'Crossroads of Youth'", Park said.

"The BIFF performance gave us opportunities to introduce the film overseas", Park said. "We received a standing ovation when we performed in Guanajuato, Mexico. This is a rare type of performance shown around the world and has significance in the history of film".

The actors,Yang and Lim, said the experience was unique. "It's like being with a traveling troupe. It does not run long and the cast and musicians gather for one or two performances", the actress said.

Lim chose the Mexico performance as her best. "The weather was blazing and there was the language barrier. However, Mexican people appreciated us showing respect to another culture", she said.

Yang said rejuvenating the old movie was a meaningful experience to participate in. "It could be a new cultural form, combining movie and music, suitable for young and old together", he said. "I hope it grows bigger, with more musicians and actors".

The film is scheduled to be screened at the former Seoul Station in June and in London during August.

"Korea's oldest silent film revived"
by HanCinema is licensed under a Creative Commons Attribution-Share Alike 3.0 Unported License.
Based on a work from this source