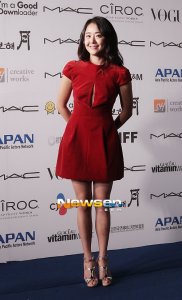 Actress Moon Geun-young started her acting career at the age of 12 in a low budget film "On the Way" in 1999. The aspiring actress then appeared as the young Eun-Seo in the hit drama "Autumn in my Heart" the following year.

Now, 21, Korea's sweetheart is returning to the television screen for the first time in five years as a gifted artist who lives as a man to figure out the mysterious death of her family during the Joseon Kingdom (1392-1910) in the drama "Painter of the Wind".

Although Moon only appeared in her first shows as the younger characters of already famous actresses including Song Hye-kyo in "Autumn in my Heart" and Lee Mi-yeon in "Empress Myeongseong" (2001), she left an impression among the Korean public as A young, pretty actress who could act.

She soon started to play the heroine in films and dramas, and eventually became known as "Korea's little sister", especially with her cute role as the young bride in the movie "My Little Bride" (2004) co-starring with heartthrob Kim Rae-won.

She proved once again that she was one of Korea's favorite actresses as reporters and cameramen filled the press conference of the drama
"Painter of the Wind". Dressed in a long navy gown, she waved to the cameras with her trademark shy yet ravishing smile.

"It feels awkward in a dress, I'm so used to being a man. Even my voice seems to be more like a boy than a girl", she said laughing.

Moon plays legendary artist Shin Yun-bok, while star actor Park Shin-yang will act as fellow artist and mentor Kim Hong-do. Based on the bestselling novel of the same title by Lee Jung-myung, Shin is born as a girl, but due to restrictions of education and other activities among women, she lives as a man her whole life, later finding herself in love with her tutor Kim.

"I'm more used to Western paintings, but I got to learn so much about Shin and Korean traditional paintings through the drama. I learned painting both in practice and theory, and I came to realize how hard it is to paint with a brush. Large strokes are easy, but it's so hard to show thin lines and describe the smallest details. But that was what Shin did best during his time", she said.

Painting was not the only thing Moon learned through the drama: she learned to tone down her image from the usual fun and bright to a more romantic and mysterious one.

"I chose this work because I like the calm and mysterious atmosphere. I didn't want to be called `Korea's little sister' anymore. When we first started shooting, I think I tried too hard to change my cute image. But now, I'm more comfortable. I've learned to respect my assets and try out for new ones steadily", she said.

From a young empress to a high school bride and now a painter, Moon is up to the task, both as a favorite among television and movie fans and also as a talented actor who can bring a character into life in her own style.

"Korea's Sweetheart Moon Becomes Mysterious Artist"
by HanCinema is licensed under a Creative Commons Attribution-Share Alike 3.0 Unported License.
Based on a work from this source