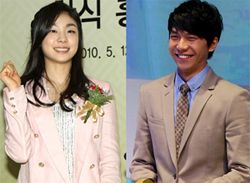 Many of Korean celebrities are given little nicknames by the press and public. For example, MC Yoo Jae-suk is considered the nation's (Korea's) MC and actress Moon Geun-young as the nation's kid sister. The same nickname for Moon was given to the international figure skating champion, Kim Yu-na. How appropriate because the ice princess will be making her debut as a singer by teaming up with "the nation's younger brother" Lee Seung-gi for a duet. This isn't the first time the two are coming together as the nation's "siblings" also teamed up for an ad campaign for a Korean bank.

The two will be remaking a song from Lee's third album titled "Smile Boy", set to be released on May 24th. Despite Kim's venture into the singing realm, fans shouldn't expect more projects like this in the near future...as of yet. There hasn't yet been any further talk of the Olympic superstar releasing her own album or advancing further into the music industry.