Korea to aim for top ten in London 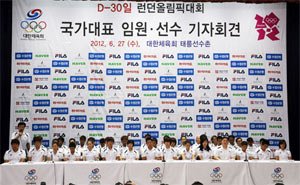 The 2012 London Olympics, the largest sporting event of this year, is within sight, and the South Korean athletes who will represent the country in the event are more determined than ever to do their best, sweating hard with last-minute preparations. The London Olympics is going to be a global festival where more than 10,000 athletes from around world will fiercely compete in 26 sports for a total of 302 gold medals. The number of gold medals is the same as the 2008 Beijing Olympics, but baseball and softball are no longer on the list of official competitions.

London, the venue of the 2012 Summer Olympics, is a city with special meaning to Koreans when it comes to the Olympics. The 14th Olympics hosted by London in 1948 were the first Olympics South Korea first participated in. At the 1948 Olympics, 67 Korean athletes competed in basketball, weightlifting, boxing, wrestling, and cycling and won two bronze medals. Since then, the country has sent teams of men and women athletes to every Summer Olympics so far, barring only the 1980 Moscow Olympics-all 15 Summer Olympic events including the 1948 London Olympics.

The Korean Olympic Committee announced that South Korea aims to rank 10th or higher for three consecutive Olympic events following the 2004 Athens Olympics and 2008 Beijing Olympics. The country was ranked 9th with nine gold medals at the 2004 Olympics and 7th with 13 gold medals (the most gold medals South Korea has ever won in a single Summer Olympic event) at the 2008 Olympics. So, it isnt too ambitious of a goal to win at least ten gold medals and rank 10th or higher at the London Olympics this summer. Experts predict that the goal could be achieved with a big margin.

South Korea plans to send more than 260 athletes to compete in 26 sports at the London Olympics this summer. The Korean Olympic Committee expects at least two gold medals in each of the events of archery, taekwondo, and judo-in which the country has been strong-and at least one in each of the events of swimming, badminton, gymnastics, shooting, fencing, and wrestling.

There are athletes that hope to continue their gold medal streak following their success at the 2008 Beijing Olympics, such as Park Tae-hwan (a swimmer who won gold in the 400-meter freestyle), Lee Yong-dae (a badminton player who won gold in mixed doubles), and Jang Mi-ran (a weightlifter who won gold in the +75 kg category). In addition, the men and women archery teams, who are the undisputable world leaders, expect at least two out of four gold medals in archery.

Jang Mi-ran says that she will be more flexible when faced with a crisis because she has become more experienced and skilled.

Park Tae-hwan, nicknamed Marine Boy, looks more confident than before. When he was training overseas, he participated in the Mel Jajac Jr. International Meet in Vancouver to see what kind of shape he was in and won in the mens 200 and 400 freestyle. With 50 days left until the start of the London Olympics, Park said that he places top priority on how he manages his race.

My practice focuses on records and races. I want gold, but its not my goal. What I want is a world record.

The Korean Olympic Committee and the Taereung Training Center are almost done with their preparation for the London Olympics. The strategies they have used are to select sports that South Korean athletes can perform well in, focus on them, resort to science in planning the training regimes, operate training camps in London, and create a stable training environment.

The number of training days the national team members spent at the Taereung Training Center and the Jincheon Training Center were increased from 210 to 240, and more trainers have been provided. Overseas and customized special training has been offered, as well.

The Korean Olympic Committee aims for 10th place with at least ten gold medals, says Park Jong-gil, director of the Taereung Training Center. I believe our athletes will win up to 13 gold medals. Im sure they will.

The only thing left for all the athletes participating in the London Olympics is for them to do their best and play fair in keeping with the spirit of the Olympics.