Korea to Get Its Own Little Mermaid 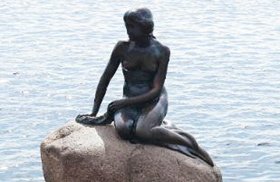 A replica of the Little Mermaid that sits on a rock by the waterside at the Langelinie promenade in Copenhagen, Denmark will be built on the Han River.

The Danish landmark is based on the character in Hans Christian Andersen's fairy tale of the same name and was made in 1913.

Seoul will make a copy of the statue commissioned in 1909 by Carl Jacobsen, son of the founder of the Carlsberg brewery, and made by sculptor Edvard Eriksen. Although it stands just 80 cm tall, the Little Mermaid draws 1.5 million tourists a year.

Park said the statue in Seoul would be the "Little Mermaid's sister". The location in Seoul has yet to be decided.

"Korea to Get Its Own Little Mermaid"
by HanCinema is licensed under a Creative Commons Attribution-Share Alike 3.0 Unported License.
Based on a work from this source