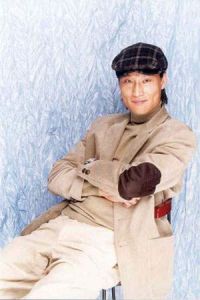 Along with a number of Korean stars taking lead roles in Hollywood productions this year, supporting actor Park Jung-hak, who is known to Korean audiences for his roles in "Musa"  The Warrior (2001) and "The Restless" (2006), has been cast in a French comedy-romance entitled Chapeu de Roue.

The film is directed by actress-turned-director Tonie Marshall known for previous comedy-romances France Boutique (2003) and Nearest to Heaven (2002). Marshall came to Seoul in March to personally oversee auditions for the role. She expressed confidence in Park's solid acting skills as well as in his sexy and debonair demeanor, according to PARK's management agency Sidus HQ.

The film, which is currently shooting in France, stars Nathalie Baye and Edouard Baer, and is about the mistress of the French Environment minister who gets involved in the illegal weapons trade, during which she meets and falls for Hang-soo, a Korean arms dealer, played by PARK. The Korean actor left his homeland May 4th to join the production, which is scheduled to be released next February of 2008 in France.