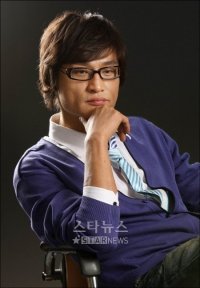 Actor Park Jung-hak, who appeared in the Korean films 'Musa' and 'The Restless', has been cast in the latest film by renowned director Tonie Marshall, "Chapeau de Roue".

Park's management agency Sidus HQ says that Marshall, who personally oversaw auditions in Seoul in March, said that Park emanates sophistication as well as sexiness. The filmmaker expressed confidence that Park's solid acting will be expressed to the full in his movie.

Chapeu de Roue is the story of a mistress of a French environmental minister who gets involved in illegal weapons trade, during which she meets a Korean arms dealer. The film is their love story.

Park will play 'Hangsoo', which is not a large role but significant enough to leave an impression. Park joined the filming in France on Friday.