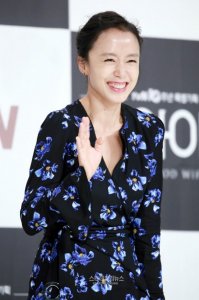 Korean actress Jeon Do-yeon won the best actress award at the 60th Cannes film festival held in Cannes, France, on May 27 for her role in "Secret Sunshine" by Director Lee Chang-dong, depicting a woman struggling to rearrange her life after the tragic deaths of her husband and only son.

Ms. Jeon is the second actress from Korea to win an award at three major international film competitions (Cannes, Berlin, Venice). Ms. Kang Soo-yeon won the best actress award at the 1987 Venice Film Festival for her role in "The Surrogate Woman".

"I cannot believe it", Ms. Jeon said as she stepped up to the award stage wearing a gold-colored dress. "I heard there were many fascinating actresses who performed wonderfully, and I'm not sure that I deserve to stand here on behalf of them. I thank Cannes and the judges who gave me this honor".

In addition, she said "it was not possible to win this award through my efforts alone. Director Lee made it happen. Song Kang-ho, playing the character Jong-chan, perfected the character Shin-ae". The well known French actor Alain Delon presented the best actress award.

The movie ("Secret Sunshine") that brought the honor of winning this award to Ms. Jeon was directed by Lee Chang-dong who returned to the movie industry after leaving the post of Korean Minister of Culture. This movie revolves around the lives of Shin-ae, played by Jeon Do-yeon, a piano tutor who struggles with forgiveness for the murderer of her son, and Jong-Chan, played by Song Kang-ho, an automobile repair shop owner in love with Shin-ae. Novelist Lee Cheong-joon's short story "A story of a Worm" provides the theme for this movie.

The New York Times made the prediction that Jeon Do-yeon and "Secret Sunshine" would win an award one day before the ceremony in the following excerpt:

"Joining the list of top-tier contenders for the Palme d'Or is "Secret Sunshine", from the South Korean director Lee Chang-dong. Mr. Lee, who turned to filmmaking after a long career as a novelist (and who has also served as his country's minister of culture), brings a contemplative, literary sensibility to a story that might easily have lent itself to melodrama and sensationalism.

It is about a young widow from Seoul who moves with her son to her husband's hometown, a small city where she knows nobody. For the first third of its nearly two-and-a-half-hour running time, "Secret Sunshine" feels like a slightly somber fish-out-of-water comedy, until a sudden catastrophe cranks up the psychological intensity, sending the heroine (the remarkable Jeon Do-yeon) into a frenzied, desperate search for some kind of peace.

Her pain is almost too much for Mr. Lee's deliberate style to contain  and there is something incomplete about the film, in spite of its length  but Ms. Jeon's portrayal of a meek soul in torment is a tour de force. She joins an impressive roster of fierce, fearless actresses gracing the Cannes screen this year. On Sunday night the prize for best female performance may well upstage the Palme d'Or".

President Roh Moo-hyun sent a congratulatory message on May 28: "A Korean movie has once again been acclaimed by the world. Alongside all the Korean people, I congratulate the winning of the best actress award at the 60th Cannes Film Festival. I extend my congratulations to Jeon Do-yeon for devoting her passion and efforts to outstanding performance. Also, I deliver words of congratulations and encouragement to Director Lee Chang-dong, staff, and impassioned performers".

A list of awardees and awarded movies at the 60th Cannes Film Festival, selected by a nine-member jury headed by British director Stephen Frears include: