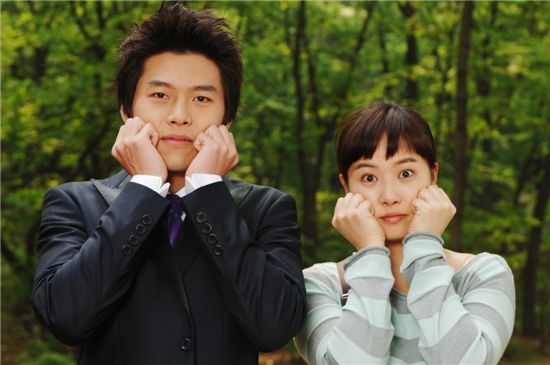 Sam-soon and Shin Do-young -- the female characters in Korean dramas "My Name is Kim Sam-soon" and "Women in the Sun" -- are knocking on the doors of Japanese television. Japanese broadcaster Fuji TV has programmed a special "Hallyu Alpha" airtime for Hallyu dramas -- at 2:00 PM, Mondays through Fridays starting January 11. So far, "My Name is Kim Sam-soon" (MBC, 2005) has ended its run and "Women in the Sun" (KBS2, 2008) has started airing in Japan since February 1. Although several Korean dramas -- including "Winter Sonata", "Jewel in the Palace" ("Dae Jang Geum") and "Stairway to Heaven" -- had previously aired in the country, it is unprecedented for a Japanese terrestrial broadcaster to set up an exclusive time slot for Hallyu dramas.

Sam-soon and Sam Shik call out love in Tokyo

"Hallyu Alpha" is an example of ambitious programming undertaken by Fuji TV, who have proclaimed "the new Hallyu era" and announced that they plan to broadcast many successful dramas that scored high viewership ratings in Korea. Fuji TV executives added that it is their goal to not only maintain existing Hallyu fans but also turn viewers who were not fond of the Korean dramas into Hallyu fans through such programming. Hence, while previous Korean dramas that aired on terrestrial networks had been edited in considerable amounts and been dubbed, the ones airing through "Hallyu Alpha" are the original, unedited versions and are broadcast in two languages--Korean and Japanese. What is also worth watching is the special video that "Hallyu Alpha" producers have put in exclusively for the programming. In case of "My Name is Kim Sam-soon", actors Hyun Bin and Kim Suna appear on the screen and greet viewers at the start of every episode. More fun is available for viewers in a bloopers video or behind-the-scenes interviews which comes on after the episode has aired.

Hyun Bin and Kim Suna have both visited Japan to promote the airing of "My Name is Kim Sam-soon". On January 8, close to 1,000 fans showed up to see Hyun Bin -- who made the Japan trip before Kim Sun-ah -- at the promotional event for the series. With another television drama "Friend, Our Story" (MBC, 2009) set to air on the network's satellite channel BS Fuji starting February 17, Hyun Bin was busy promoting his work on several live TV shows on Fuji including the variety show "Waratte Iitomo".

On the other hand, Korean actress Kim Sun-ah -- who was voted "Favorite Korean Actress" last year in a survey conducted by female-targeted entertainment channel LaLaTV -- paid a surprise visit to the country, just before the final airing of "My Name is Kim Sam-soon". She delighted Japanese fans by cheerfully conducting interviews in her fluent Japanese. It seems that the post-Yonsama, "new Hallyu era" is most likely be led by Korea's female actresses.