Korean actresses no longer pretend to be pretty, weak, ingenuous 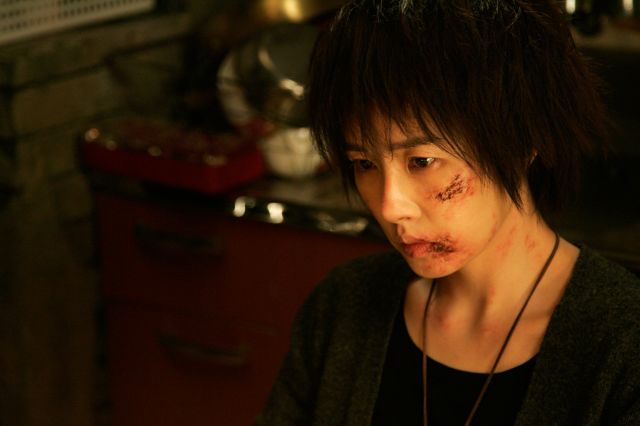 Korean actresses have changed. They are giving up pretending to be pretty, weak and ingenuous.

Kim Sun-ah, model-turned actress who is 170 centimeters (near six feet) tall plays the role of a woman paralyzed from waist down in the movie "The Five" that will be released Thursday. Instead of showing off her slim legs, she rides an electric wheelchair with both legs tied up. A woman who lost her husband and daughter by a murderer, she is a vengeful person. To show such emotions, Kim has disheveled hair, and her face is bruised since she fights with the murderer.

Jeon Do-yeon in "Way Back Home" plays a woman who is falsely accused of carrying drugs and is locked up in a jail in a foreign country. She doesn`t give off charm of a femme fatal. Ha Ji-won performs a swordsmanship action at "Chosun`s Angels" that will be released in early next year.

Soo Ae who attracted 3.22 million viewers for her movie "The Flu" this summer dresses plain as she plays a medical doctor who develops vaccines for a fatal virus. She doesn`t pretend to be weak, and struggles with her face smeared in soot and blood to save her virus-infected daughter. Han Hyo-joo in "Cold Eyes" plays a female detective with extraordinary talent of observation and intelligence in arresting a criminal.

Korean actresses are no longer stirring up protective instinct. Experts say this is because Korean movies are tilted towards thriller, noire and action movies. Among 13 popular movies that attracted more than 3 million viewers this year, 10 excluding "Miracle in Cell No.7", "The Face Reader", and "Man on the Edge" are the so-called "strong and heavy" movies. In a rough and tough atmosphere, actresses` elegance is neither expected nor work.

The number of melodramas and romantic comedies has declined sharply compared with in the 1990s and 2000s. Movie "Architecture 101" is one of the few melodramatic movies that succeeded recently, drawing 4.11 million viewers. Movies with the only heroine or romantic comedies have seen sluggish records. "Happiness for Sale", a movie that was released this spring with Choi Kang-hee as the only heroine, draw 333,000 people and ""Queen of the Night" with actress Kim Min-jung attracted just 250,000 people.

A CEO of a movie production firm said, "Twenty-something actresses who has strong ticket power are rarely seen. Lack of movies that use these actresses` image and appearance also affected the neutralization of female actresses". Film critic Kwak Young-jin said, "Many Korean movies have two heroes. Harmony between the two is more important than appearance.

On the disappearance of actresses who contend with appearance, film critic Shim Young-seop says, "It is positive that the Korean society sees woman as a more active and independent subject. Critic Kang Yoo-jeong said, "As actress Yoon Jung-hee plays a heroine role at `Poetry` directed by Lee Chang-dong, actresses need to make efforts to melt into their characters. A good example is Tilda Swinton who performed with dentures in "Snowpiercer".

"Korean actresses no longer pretend to be pretty, weak, ingenuous"
by HanCinema is licensed under a Creative Commons Attribution-Share Alike 3.0 Unported License.
Based on a work from this source