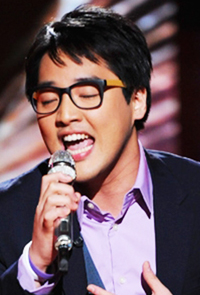 Han Hee-jun, a 1.5-generation Korean-American, made it to the Top 13 of the 11th season of popular TV program "American Idol", when it aired on Feb. 28.

The 24-year-old from Flushing in Queens, N.Y., sang "Angels" by Robbie Williams in the last round. In control and poised, Han had the full attention of the audience. The three judges were a little more critical; legendary diva Jennifer Lopez said, "You have a voice that's smooth as silk; not sure it showed off how beautiful your voice is".

His performance lacked emotion, keeping the listeners waiting for a breakthrough moment.

Judge and Aerosmith member, Steven Tyler added he was not sure if the song was an ideal choice. Another judge, music producer Randy Jackson, agreed.

Previously Han sang "How Am I Supposed to Live Without You" by Michael Bolton which received rave reactions from the judges. All three were visibly impressed by his performance. Tyler said, "I think you can be an American Idol". Lopez complimented him on the control of his voice, and Jackson said; "I am really impressed and shocked".

Han moved to the United States with his family when he was 12 years old. A devout Christian, Han volunteers at a non-profit organization for children with special needs every week.

"American Idol" is a survival audition program for singers on Fox which discovered Kelly Clarkson. John Park, a semi-finalist from Korean survival program Superstar K2 made it to the Top 24 on season nine as did Paul Kim, a contestant from MBC's "Star Audition: The Great Birth" on season six.

"Korean-American en route to becoming American idol"
by HanCinema is licensed under a Creative Commons Attribution-Share Alike 3.0 Unported License.
Based on a work from this source