Korean Cinema 2011: The View from Here 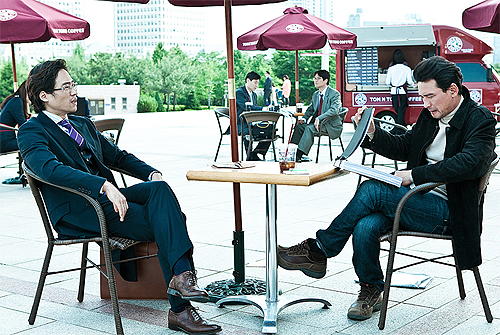 US-based author and curator of film at the Smithsonian's Freer and Sackler Galleries in Washington, DC, Tom VICK shares his views on recent trends he has noticed programming their Korean film festival.

How do you introduce new Korean films to an American audience? Since 2004, when I began programming the Korean Film Festival DC, the answer to this question has become more difficult to answer. This is not to say that it's harder to find good films. Quite the opposite. The problem (if it can be called a problem) is that there are so many films to choose from.The explosion of digital production and distribution in the last decade or so has made it easier than ever to make a film, but harder than ever find an audience for it.

Korea's film industry produces a deluge of commercial and independent releases. Veteran directors like Hong Sang-soo, Park Chan-wook and Kim Ki-duk have established bodies of work and are at least familiar to American fans of Korean cinema. But recent years have brought a proliferation of young, talented filmmakers with only a film or two under their belts.
How do you introduce these unknown quantities? What can their films say to a foreign observer about Korean filmmaking and Korean society?
What follows are my observations from a year of watching Korean movies on the international festival circuit in preparation for programming the 2012 edition of the Korean Film Festival DC.
Addressing the Issues
Last year I was on the jury of an international film festival. One of the films up for consideration was Ryoo Seung-wan's "The Unjust". The non-Korean members of the jury were impressed with the film as a well-made thriller, but our decision to give it an award was swayed by a Korean jury member who admired Ryoo's courage in confronting the apparently very real issue of police and government corruption.

Just as the Occupy movement in the US has turned attention on how the close ties between Wall Street and the government manipulate the economyto the detriment of the lower and middle classes, Korean filmmakers have begun addressing similar political issues in a frank manner I haven't seen since the early days of the Korean New Wave, when directors like Lee Chang-dong and Park Kwang-soo tackled the tough issues of the time head-on.

Kim Joong-hyeon's "Choked" and Shin A-ga and Lee Sang-cheol's "Jesus Hospital" powerfully convey the perilous lives of people strangled by debt and poverty, while Yang Jung-ho's "Mirage" and Yeon Sang-ho's "King of Pigs" address the pressures and traumas of growing up in Korea's strict educational system.

All of these films provide a corrective to the efficient, conformist "tiger economy" image the Western media ascribes to South Korea these days. Even in Kang Hyeong-cheol's "Sunny - 2010", a feel-good hit that – except for the many references to eyelid surgery – should connect with audiences anywhere, similar issues arise as we watch the heroines negotiate the difficult passage from high school to adulthood.
Love, Sex and Everything in Between
Considering that Korean films have never been shy about depicting sex and nudity, I was surprised to learn that Lee Hae-yeong's charming sex comedy "Foxy Festival" caused something of a sensation when it was released in Korea. Not because of anything visually explicit, but because the film dared to bring to light everyday sexual peccadillos that are apparently just not talked about in public like bondage, fetishes and sex toys.

It and Kim Hyun-seok's "Cyrano Agency" take comedic looks at the minefield of modern relationships. In the latter, clients require elaborately stage-managed events just to make themselves appear desirable to potential partners.

But if these films seem tame, others give darker, more jaded impressions of sexual relationships. Jeon Kyu-hwan's "From Seoul to Varanasi" and Noh Kyeong-tae's "Black Dove" are raw, sexually explicit dramas in which the characters have extramarital affairs not, it seems, out of passion or desire, but as a way of alleviating boredom, pain or emotional emptiness. The more naked the characters get, the less they seem to feel.

Jeon and Noh are both young directors, and their films may accurately depict the attitudes of a generation that came of age in a time when dating and online shopping have come to resemble one another more and more. Which is why Kim Tae-sik and Park Chul-soo's odd little experiment "Red Vacance Black Wedding" stands out in comparison.

Both Kim and Park are middle-aged, so it's perhaps no surprise that their two-part film is about the eternal middle-aged male fantasy of sleeping with younger women. But what stands out is that the characters are crazed with desire for one another, in sharp contrast to Jeon and Roh's alienated lovers. They are fools for love in ways that Jeon and Roh's characters never would be. Is this the dividing line between the older and younger generations?
Narrative Invention on a Budget
I'm always amused when some film critic accuses Hong Sang-soo of repeating himself. That's just what Hong Sang-soo does. Like him or not, he has injected into Korean cinema a sense of narrative experimentation that has flourished in the last few years.
Younger filmmakers seem to have an ambivalent attitude towards his international success, but Hong's influence in this regard is clear, and seems to have paved the way for younger filmmakers to play with narrative form.
Other than his own "The Day He Arrives", the most Hong-like film I saw last year was "Romance Joe", directed by his former assistant Lee Kwang-kuk. But even Lee doesn't stick too close to his ex-bosses' territory (except for the film's self-referential story about a filmmaker in search of ideas). Instead he cleverly creates a structure of nesting narratives that culminate in a strange but fitting tribute to "Alice in Wonderland".

That this narrative inventiveness seems to occur mostly in the indie arena is perhaps a case of necessity being the mother of invention, but whatever the reason, last year brought a host of creative films that expand the possibilities of low-budget filmmaking.
Park Hong-min's "micro budget 3D" film "A Fish" may be a bit of a stunt. The 3D is less interesting than its smart narrative structure, which lures you in one direction before hooking you in another once you've taken the bait.
Equally inventive are Oh Young-doo's "Invasion of Alien Bikini" and Jo Sung-hee's "End of Animal", both fully-realized science fiction films made on shoestring budgets. Oh begins with an exploitation movie premise (a sexy alien comes to Earth to mate) and puts it through some surprising shifts in tone and mood, while Jo makes efficient use of a barren winter landscape to imply an apocalypse occurring just out of our sight, while slyly revealing his characters' motives bit by bit.

It has been said that all films are documentaries in that they reveal truths about the times and places where they were made, either intentionally or inadvertently. I hope that in the last eight years audiences at our festival have gotten a fair introduction to Korea's film industry and can now appreciate the ways that Korea's many talented filmmakers address issues and subjects familiar to all of us from their own unique perspectives, so that we can understand them from ours.