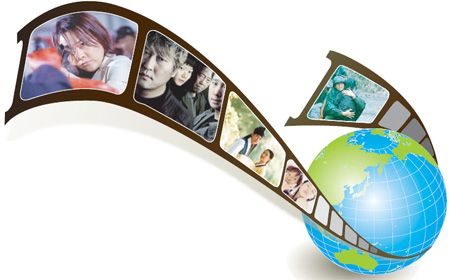 In recent years, South Korean cin ema has established a notable place on the world map ― two local titles will be competing at the Cannes Film Festival next month.

Moreover, the recognition is beginning to branch out of the festival circuit into underground youth culture, and finally, academia.

Before examining the phenomenon, it is interesting to note Japan’s example: cultural content such as manga (comic books) and anime have long become mainstream entertainment while many institutes of higher education place importance on Japanese studies. This can be seen as partially the result of when people who discover the magic of manga as kids grow up to become specialists in Japanese history and culture, according to John Duncan, professor and director of the Center for Korean Studies at the University of California, Los Angeles (UCLA).

South Korean cinema has similar potential. American youths in remote parts of the United States, in places where they may not have Korean friends who act as cultural ambassadors, are downloading Korean films, said Duncan.

More importantly, a more “legal” channel is becoming available to foster long-term interest ― and academic focus ― on Korean cinema. Since 2007, the Korean Film Council (KOFIC) has been running a 100 million won (roughly $90,000) support program to provide DVDs, books and other film-related material to designated institutes across the world.

In Australia, Korean cinema has a stronger presence due to exposure through film festivals.
However, to some degree it is not as easy to buy Korean DVDs these days because of their online availability, said Elizabeth Connor, school administration manager at the University of Sydney.

“In this environment, the KOFIC contribution to our university is even more valuable, as it allows access to rare, classic, English-subtitled Korean films readily available for use in teaching and research.”

Currently 25 academic and cultural centers around North America, Europe and Asia/Oceana are beneficiaries of the three-year grant. More institutes are expected to receive support, as applications for the 2010 term were due Wednesday.

“We notified universities with films studies and/or Korean studies programs, national libraries and film-related institutes about the KOFIC Hub-Library program and began accepting applications. A panel of reviewers decides which libraries to support in careful consideration of geographical importance and prospects for development of Korean film studies, among others,” said Park Ji-yin from the KOFIC’s International Promotion Department.

The selected centers are guaranteed either full or partial support for three years to become a Korean film hub for their respective regions. 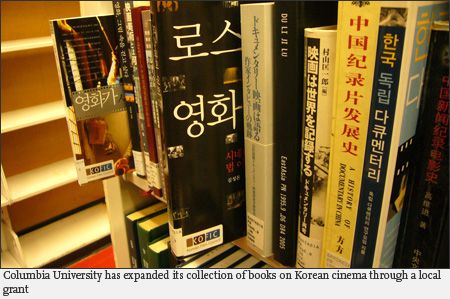 The first recipients of the KOFIC grant were mostly large American institutes such as UCLA, Columbia University and Korean cultural centers in New York, which are home to some of the largest Korean communities overseas.

At Harvard University, the Yenching Library saw a significant increase in the size of its Korean film collection. “Before we would make individual purchases if there was a request for a specific material, and we had no plans to make an all-encompassing section,” said Kang Mi-kyung, librarian for the Korean collection.

Smaller institutes such as Smith College, a liberal arts college in Massachusetts, are also benefitting from the grant. Smith plans to offer a course on Korean film and literature this fall semester. 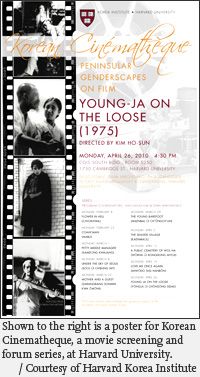 Since 2008, KOFIC started receiving more applications from Europe, and recently, other first-time countries such as Canada, Mongolia, Vietnam and Israel. Designated “hubs” therefore provide materials to places with a higher demand for Korean cultural content as well as regions where it would otherwise be difficult to access information on Korean cinema. 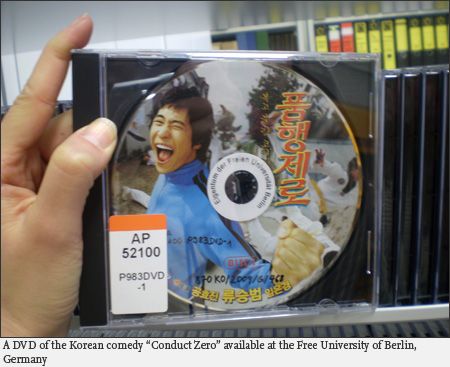 Lately the Free University of Berlin’s Institute of Korean Studies began to shift its focus from what had traditionally been politics to culture and literature, said Carolin Dunkel, who is in charge of Korean film content at the school library. The use of movies featuring “pansori” (Korean opera) has become thus integral as teaching material.

Here, students also regularly watch films in a Korean cinema club. The school has been a beneficiary of the KOFIC grant since 2007.

“We are trying to promote our Korean films to a greater audience by joining film-libraries-networks and linking our catalogue to meta-search catalogues to provide easier access. And we are preparing the exchange of DVDs between university institutions,” said Dunkel.

Korean movies have started appearing at Israel’s Jerusalem and Haifa Film Festivals over the course of the past seven or so years, and are now available in local cinemas, cable TV and video stores.

At Tel-Aviv University, Korean studies professor Alon Levkowitz uses DVDs provided by the KOFIC for lectures. “The movies allow (the students) to visualize Korea and to understand the history of Korea in another way,” he said about showing titles such as Im Kwon-taek’s period piece “Chunhyang” and the Korean War (1950-53) action flick “Taegukgi.”

Outside of class, students have a wider selection of titles for the Korean cinema club’s regular screenings. The club’s membership size has been on the rise over the years, and those who are more serious can take the course “New Korean Cinema.”

Regarding the potential of Korean film studies as an established area of study in Israel, Levkowitz said he sees an increase in the number of publications on the subject. An Asian Studies conference held last year at the Hebrew University in Jerusalem, for example, had a speaker introduce Korea’s first blockbuster film “Shiri” (1999). 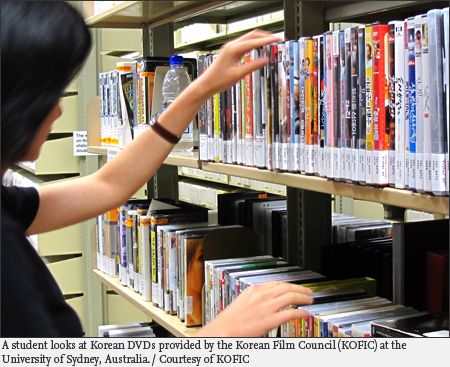 Korean film studies are already well-established in Australia. In 2009, the 6th Biennial Conference of the Korean Studies Association of Australasia was held at the University of Sydney, and one of the panels was devoted to film studies.

“Korean film has been accepted into film studies on its own merits, so that it is no longer seen as a novelty, but rather almost as an expected presence,” said Connor from the university. Korean film, however, is still largely studied in conjunction with other areas such as Korean or Asian media/arts.

The school has received about 400 movies and related books through the grant, which proved to be useful for organizing events such as “The Forgotten War - Remembered in Film” in time for the 60th anniversary of the Korean War, said Connor. “This event materialized because of the excellent range of films we received from the KOFIC that included historical as well as contemporary genres and assisted this area of research.”

In the United Kingdom, film festivals and arthouse cinemas regularly screen Korean movies, and there is also an annual Korean film festival.

“Cinema is not simply a window on Korea, but rather it is a part of Korean culture that travels to us. As interest in Korea has grown as economic and other links have grown, cinema is a particularly valuable resource for enabling students to understand Korea,” said Chris Berry, professor of film & television studies at Goldsmith, University of London.
“In addition, Korean films have become more influential in global cinema, as is demonstrated in the purchase of remake rights by U.S. studios. Therefore, studying Korean cinema is also important for understanding global cinema trends.”

KOFIC’s support has expanded the libary’s Korean cinema collection, which attracts students from other schools in the area, he said. “The existence of the collection makes it possible for us to support more Ph.D level research into Korean cinema.”

Providing DVDs to libraries comes most timely in this fast-evolving digital age.
“Audiovisual material for lectures is becoming increasingly important in higher education. We now have about 400 more Korean DVDs, and this has helped us greatly in making the transition from a traditional library to the new media format,” said Kang from Harvard. “A student studying Korean arts and culture wanting to write about (the folktale) ‘Chunhyang’ can now watch film renditions, in addition to reading the story.”

Moreover, the expanded Korean film collection proves helpful for events such as Korean Cinematheque, a movie screening and forum series organized by the Harvard Korea Institute. The Harvard Crimson magazine also noted the popularity of Bong Joon-ho’s “Mother - 2009” at the Harvard Film Archive.

“I wouldn’t say that there is a direct cause-and-effect relationship between the expanded collection and increased interest in Korean cinema. But I’d say the two are strongly correlated,” said Kang.

The librarian moreover emphasized the importance of continued support.

“As much as the project is about establishing a ‘hub library,’ it is in the best interest, for Korean cinema as a whole and academic institutions, to continue making Korean films and related material available to the public. Our library had no plans to expand the Korean film collection, and this project is very meaningful for the future of the development of Korean film/media.”

The hub library program is expected to continue in the near future, according to Park. Some however, question the benefits of the endeavor, particularly as the costly project does not yield immediate financial profits.

One may however consider a popular marketing tactic. The Wall Street Journal is one of the most popular business newspapers in the world and it makes sure it stays that way by “fostering” future long-term subscribers ― college students.

They offer a 70-percent discount off the cover price, and the youths, having become “tamed,” avid readers of the paper, will continue to feed on it as full-paying members of the labor force post-graduation.

This is called long-term investment ― targeting minds that are soaking up everything like a sponge before they harden and form lifelong tastes.

Similarly, there is nothing like stumbling upon a great movie at a library or a free local screening, and the lasting, colorful audiovisual experience it would inspire in young minds ― not just for the future of Korean cinema but for the universal appreciation of the arts wherever one may be in the world.