Korean drama of the week "Arang and the Magistrate" 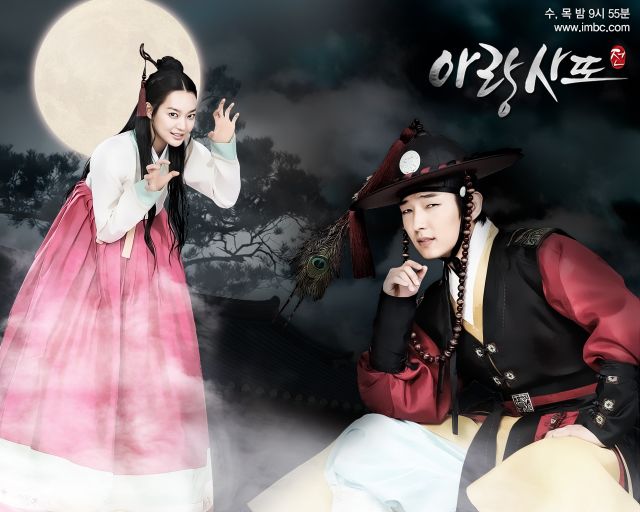 Korean drama of the week "Arang and the Magistrate" (2012)

20 episodes - Wed, Thu 21:55
Also known as "Tale of Arang"
Synopsis
Arang is an aggrieved ghost who happens to suffer from amnesia. She sets out on a journey to find her true identity but first she needs to find someone in the living world who can see her and help her. That person is Eun-oh. She makes a plea to Eun-oh to help her recover her memories. Eun-oh jokingly tells her that he would only help her if he becomes the district magistrate and so Arang cleverly finds a way to have him appointed as a magistrate overnight. This drama brings the supernatural romantic story of Arang, a ghost who seeks answers to her untimely death, and Eun-ho, a young district magistrate who abhors ghost!

Eun-oh (Actor: Lee Joon-gi)
Born with the ability to see ghosts, Eun-oh does not believe whatever the ghosts whisper into his ear. One day, his mother suddenly disappears and as he goes looking for her, he comes across a young female ghost called Arang who wants his help in seeking answers. All she wants is to know her identity and her pleading eyes remind him of his own missing mother. After finally agreeing to help Arang, as a newly-appointed district magistrate, he finds himself being drawn into a world of mystery and supernatural forces.

Arang (Actress: Shin Min-ah)
The only daughter of Milyang governor Lee Joong-hoon. Her given name is Lee Seo-lim. She once possessed a pleasant and agreeable personality but tragedy struck one day and her life was changed irrevocably after her death. She was taken into the deep realms of darkness that altered her temperament and character to the point where she is now cynical and tough as nails. She is a soul with a grudge who lusts for revenge. Returning to the living world as a ghost desperately seeking answers surrounding her death, she appears before the district magistrate.

Joo-wal (Actor: Yeon Woo-jin)
He was abandoned as a child and had no name. Enduring mistreatment at the hands of strangers and barely scraping by, he is visited by a woman one day. She offers to grant him one wish on the condition that he must obey her. Several days later, she takes him to Lord Choi's home in Milyang where he becomes the foster son with a name, Joo-wal. Before he was called a little scoundrel in the mean streets but now everyone calls him, "young master" in a sudden reversal of fortunes.

Bang-wool (Actress: Hwang Bo-ra)
She is a female shaman who has some mystic powers but not quite enough of it to say she is a professional shaman; she is able to call spirits but cannot see them. So she gets by with her mediocre shamanic powers through wit and cunning. Because she feels inadequate about her powers, she constantly prays for a mountain god to visit her and bestow powers upon her but the only spirit that appears is Arang. She despises Arang who only shows up when she needs to ask for a favor but after a while she gradually warms up to her as a good friend.

Jade Emperor of the Heavens (Actor: Yoo Seung-ho)
He rules over all the kings in the heaven. Nobody knows his age but he takes on the form of a young handsome boy. He is smitten by Arang when he first sets his eyes upon her and tries to grab her attention. But Arang considers him as a perverted old man, who unbeknownst to her, happens to be the most popular god in the heavenly world. At first it seems that he is playing with Arang's and Eun-oh's fates under the guise of helping them solve a missing soul case but he has deeper, altruistic motives.