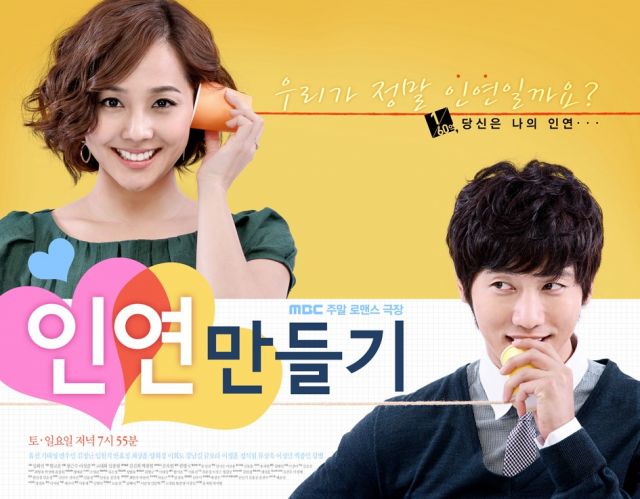 31 episodes - Sat., Sun. 19:55
Alternative title : "Seeking Love"
Synopsis
After immigrating to Canada, Sang-eun graduated from law school and becomes an attorney.
She plans to marry Alex, an American and fellow attorney, and she introduces him to her folks.
But her dad strongly disapproves of Alex and orders her to meet a bachelor in Korea that they picked out for her before she goes ahead and marries Alex.
Sang-eun reluctantly flies to Korea whereupon she meets the bachelor at the airport.
She and Yeo-joon have a heated argument minutes after they meet each other.
Yeo-joon is not ready to get married as he is trying to focus on his career.
There's also a young lady who has a secret crush on Yeo-joon.
The relationship between Sang-eun and Yeo-joon is stormy in the beginning but they gradually warm up to each other after getting to know each other in a topsy-turvy way.

Han Sang-eun (actress Eugene)
Korean-Canadian lawyer. She introduces her American boyfriend Alex to her family as the man she wants to marry but her dad vehemently disapproves of Alex. Her parents pick a nice Korean bachelor for her to marry and she visits Korea to meet him. His name is Yeo-joon and Sang-eun finds him intolerable and irritating. She's a confident and intelligent woman.

Kim Yeo-joon (actor Ki Tae-young)
He's a perfectionist and physician. He has a high regard for himself and was spoiled by his parents and thus, has a self-centered personality. He gets upset when his parents tell him to marry a woman he has never dated or met before. He's not happy that Sang-eun has an ex-boyfriend that she can't forget but he's not interested in marrying her for that matter.

Kim Yoon-hee (actress Kim Jung-nan)
She is single and the older sister of Yeo-joon. She was going to marry Hae-seong, her high school sweetheart, but Hae-seong's parents disapproved of her and so she broke up with him. She became pregnant with Hae-seong's baby before they ended their relationship but didn't tell him he was the father. So she raises their baby all by herself. Hae-seong reenters her life and wants to marry her but she resists his overtures because she still can't get over the pain of rejection she endured from his family.

Shim Hye-rim (actress Clara)
The eldest daughter in her family. Her dad is a nouveau riche who made his fortune by speculating in real estate. Having a pretty complexion, she used to model. Being very materialistic, she tries to woo Yeo-joon, a doctor whom she wants to marry, but he's hardly interested in her at all.

Jeong Gyoo-hwan (actor Jung Suk-won)
He's a cameraman and a playboy who loves the company of women. He's athletic and good at sports. He has a free-spirited personality but is very professional when it comes to work. With his handsome looks and polite manners, he has broken the hearts of many women but Yoon-hee is the only woman he cares about.

Kang Hae-seong (actor Byun Woo-min)
The eldest son of the founder of the Haesung Group. He's Yoon-hee's high school sweetheart. But he breaks up with Yoon-hee when his parents' disapprove of her as their daughter-in-law and then gets married in an arranged marriage, which doesn't last and ends in a divorce. Unable to forget Yoon-hee, he endures humiliation as he tries to persuade her to marry him.

Kang Se-won (actor Ryu Sang-wook)
The youngest son of the founder of the Haesung Group. He meets Sang-eun, a childhood friend, at the airport by sheer coincidence and thinks that he and Sang-eun are destined to get married.

Han Hyo-eun (actress Kang Byul)
She's an energetic woman and seeks a comfortable life by marrying a rich, handsome man with a gentle personality. She's used to getting her way with her pretty looks.