Korean drama of the week "Love and Marriage" 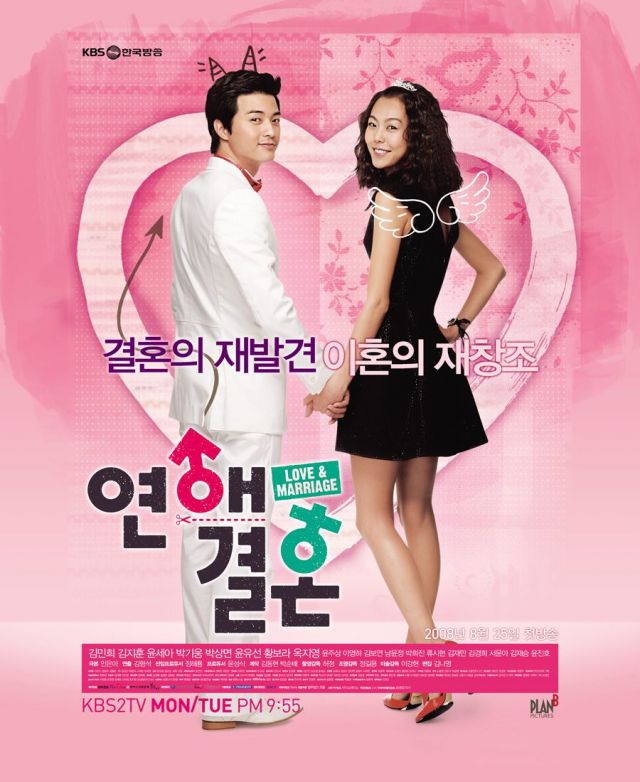 Synopsis
What would happen if a couple manager and a divorce lawyer fall in love? Couple manager's task is connecting peoples' love, and divorce lawyer's job is detaching people's relationships. Nevertheless, the two jobs share the same conclusion; it's love. Ganghyeon is a 'couple manager'. She manages peoples' arranged marriages, but dreams about her love marriage. She gets out from work for a marriage fraud, and starts to work as a remarriage couple manager. Unmarried woman, who failed in love, enters into the world of remarriage. Hyeonsu is a 'divorce lawyer'. He married through the arranged marriage, and got divorced. He's got the wounded heart about the divorcement, and doesn't know what true love is. Ironically, he needs to help those who have the same pain and trouble that he has.

Lee Ganghyeon (Kim Min-hee)
She is a successful matchmaker and believes that she is good at romantic relationship. Although she is a matchmaker who arranges conditional marriages, she wants to marry for love. After losing her love and getting fired for just a single mistake, she becomes a remarriage matchmaker. A single woman with broken heart enters a strange world of divorce. Not knowing what love is, she must talk about marriage and divorce.

Park Hyeonsu (Kim Ji-hoon-I)
He had an arranged marriage once, but got a divorce because of practical problems. His occupation is a divorce lawyer. He thought that a divorce lawyer could make couples, who were unhappy because they were together, regain happiness by separation. However, as he himself experienced a divorce, he learned that a divorce could be very painful. Knowing how painful it is, he must solve others' divorce problems.

Seo Hwayeong (Yoon Se-ah)
Hwayeong is a food stylist. She divorced from Hyeonsu, flies to Paris and studies in there. However, she still misses her ex-husband. She comes back to Seoul when her mother gets a cancer. She could meet Hyeonsu, but she gets confused after knowing about Ganghyeon. Because of her mother's wish, seeing her daughter's marriage before she dies, she joins her cousin's remarriage company as a member. Hwayeong starts to work for the company as a food stylist and meets Ganghyeon.

In Gyeonhwan (Park Ki-woong)
Gyeonhwan is a judicial apprentice. He meets Ganghyeon for five years but always feel pressured, because Ganghyeon forces him to set the good condition that she wants from him. He leaves Ganghyeon and meets somebody else from the judicial training institute, who managed him to work at 'The Last Love' as a probationer.

Added episode 1 for the Korean drama "Love and Marriage"