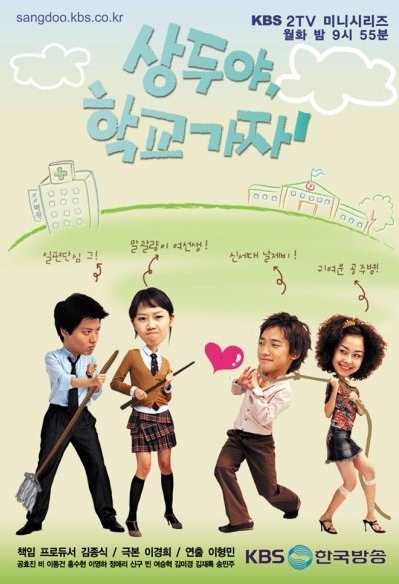 16 episodes - Mon, Tue 21:50
Synopsis
International singer/actor, Rain ("The Fugitive Plan B"), stars in "Sang Doo! Let's go to school" one of his first dramas. Joining him is Gong Hyo-jin ("Pasta") who is renowned as one of the queens of romantic comedies. The chemistry of these two stars sparks in this unique love story that tells the unfortunate tale of Cha Sang Doo and his long lost childhood love, Chae Eun Hwan. Dealing with such problems as wrongful imprisonment, single fatherhood, and enrolling in high school as an adult, Sang Doo is a man with many problems, trying to make ends meet. Sang Doo and Eun Hwan spent their childhood as the best of friends, but after an unfortunate accident, Sang Doo was separated from his love. Years later, in order to take care of his sick daughter, Sang Doo becomes a gigolo to pay the medical bills. By chance, he finds Eun Hwan, who is now working as a high school math teacher. In an attempt to regain her love, Sang Doo re-enrolls in hopes of winning her over.