Korean Drama of the week "Shut Up: Flower Boy Band" 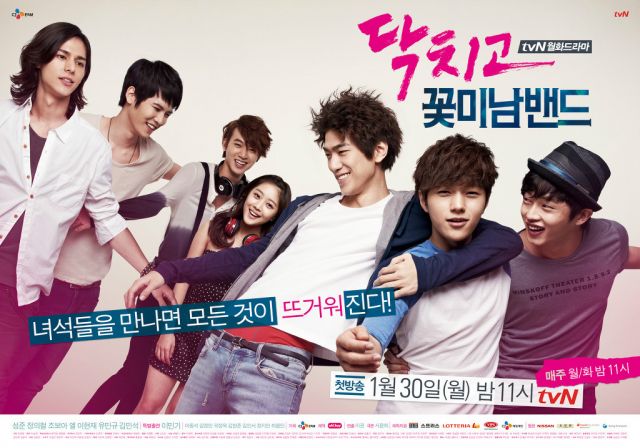 16 episodes - Mon, Tue 23:00
Synopsis
As the second installation of tvN's Oh! Boy series ("Flower Boy Ramyun Shop" being the first), "Shut Up: Flower Boy Band" is the story of a high school rock band dealing with friendship, rivalry, romance and their passion for music. Lee Min-ki ("Really Really Like You"), takes a break from his real-life rock career to return to television for the first time since 2007 as Byeong-hee, the leader and vocalist of Eye Candy. Other members include Kim Myung-soo, also known as L from the popular K-Pop group Infinite, Sung Joon ("Lie to Me"), and Yoo Min-kyu, from tvN's reality audition show, Flower Boy Casting: Oh! Boy.

Byeong-hee (Lee Min-ki) is the crazy, free-spirited leader and vocalist of the popular underground rock group, Eye Candy. Joining him is Ji-hyeok (Sung Joon), chic Hyeon-soo (Kim Myung-soo), playboy Ha-jin (Yoo Min-kyu), silent Do-il (Lee Hyun-jae) and baby-faced Kyeong-jong. When their delinquent-ridden school is forced to close down, they debate whether it's even worth returning to high school at all. However, due to an outside confrontation with their new school's current ruling band, Strawberry Fields, Eye Candy decides to attend Jungsang High out of spite so they can rule the school once again.

"Shut Up: Flower Boy Band" is a music drama like you've never seen it before; relentless and highly stylized to the punk sentiment, these flower boys aren't trying to be your friendly, neighborhood idols.

Also known as: Flower Boy Band Eye Candy, Shut Up and Let Me Play, Shut up and Let's Go.