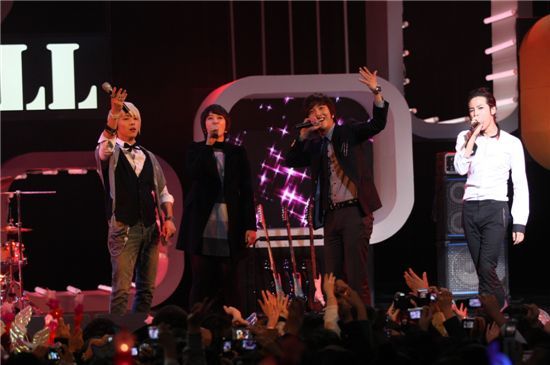 Members of A.N.JELL from the hit SBS series "You're Beautiful" [Market Insight]

The show's promoter Market Insight announced in a press release on Thursday that the 11th episode of "You're Beautiful" broadcast on August 3, posted a rating of 6.9 percent, beating out TV Asahi's suspense mystery drama and TBS' "Mito Kimon" and NTV's "Karei naru Spy - Gogodora" which all air during the 3:30 p.m. timeslot.

The hit SBS drama "You're Beautiful", about a girl pretending to be a man to join the popular idol group A.N.JELL, made household names out of actor Jang Keun-suk and actress Park Shin-hye in Korea and throughout Asia.

"You're Beautiful" aired in Korea during the latter half of 2009, maintaining viewership ratings in the 10 percent range despite competing against KBS' blockbuster drama "IRIS" during its run.

The show has been a success overseas as well, selling its publication rights to several broadcasters in Asia including China's CCTV, Thailand's BBTV, Philippines' ABS-CBN and Singapore's MATV.

"Korean drama "You're Beautiful" scores top rating in Japan"
by HanCinema is licensed under a Creative Commons Attribution-Share Alike 3.0 Unported License.
Based on a work from this source