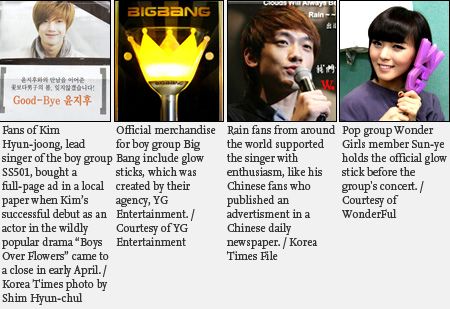 University student Kim did not start out as an avid fan of Korea's top male group TVXQ. In fact, she didn't like them at all.

"They were different and it was hard to understand what they were going for at first", the 19-year-old student, who wished to be identified by her last name, told The Korea Times.

But now, she is one of the group's biggest fans, flying out eagerly to Japan to watch them perform at a concert.

If you happen to find a crowd of excited teens grouped somewhere taking photos, reaching out for a glance with arms full of presents, it means a star is within the vicinity.

In the late '90s, fans were more humble and passive; they would memorize lyrics, follow dance moves and dress up like their favorite stars. But now, they have become more systemized and active, from publishing advertisements on daily newspapers to donating money under the name of their singers and actors.

"The Internet has helped a great deal in what fans are doing now. Agencies don't need to give out additional information as they used to in the past. Fans are quick and efficient, thanks to the Internet", Jung Sang-hee, from SM Entertainment, one of the biggest agencies here, nesting groups like Girls' Generation and TVXQ, said.

Back when the Internet was not yet popular among the young, fans would call up the "mail box number" through which agencies would offer schedules and other information about the stars, while the staff of official fan clubs would call up every member to inform them of an event or special schedule.

"TVXQ has an official fan site, but that's not the only place where you can get information. Now, fans make their own, which are sometimes more effective and convenient", Kim said.

For avid fans, taking a photo or getting an autograph is nothing special. These fans are not afraid to spend their time, effort and money to heighten the image of their favorite celebrities.

"We collect money and donate it to the poor under (the member's) name. We gave out kimbap and bottled water during candle-lit vigils last year. On the members' birthdays, we celebrate not only with the members, but also the whole crew working with them and preparing food and presents for them, too", Kim added.

Some enthusiastic fans go further and publish advertisements in newspaper dailies, celebrating birthdays, anniversaries and even bidding farewell to characters the stars play in television dramas or movies.

The "Counter Ban for Park Shin-yang" started to support Park, who was banned from appearing in dramas made by the Korea Drama Production Association, the home of many major production companies, last year. Park asked for 170 million won per day per additional episode of the drama "War of Money" in 2007, and when the producers failed to pay him, Park sued them.

The group has been holding campaigns and sending statements to related organizations and newspapers via e-mail, hoping to lift the ban altogether.

"We want people to know about his case because we need many to stand up for Park and show him support. Joining the "Counter Ban for Park Shin-yang" is just one way of showing support for (him). There are many other ways as well; we're just more vocal and forward", an organizer of the campaign told The Korea Times via e-mail.

Paulette Espiritu is one of the administrators of "Cloud Philippines", a fan club of entertainer Rain based in the Philippines. She initially didn't start out as a big fan of Rain, but little by little, she realized the potential of the Korean singer.

"I was never a fan of East Asian music prior to this and I thought K-pop was (cheesy). But when I heard Rain's voice and saw his dance moves, which could rival the dance artists in the West, it completely shattered all my previous notions about K-pop", she told The Korea Times via an e-mail interview.

Cloud Philippines was established in 2006, with more than 2,000 members helping to promote Rain, his projects and activities in the Philippines and also provide a unified home for his fans in the country.

"Whenever Rain releases a new album, movie or drama in the Philippines, we organize promotional activities such as poster distribution, fan awareness via text, email and website announcements, sending requests to radio stations and music video networks like MYX and MTV Philippines. We also try to connect with the companies involved to offer our assistance in whatever marketing activities they have planned for Rain. Lastly, we form tour groups and provide assistance in any way we can to those who are interested in attending his concerts and promotional activities in Korea and other countries", she said.

Why do fans carry out these activities? Are they just trying to get their stars to notice them, or hoping for more?

"We just want to create a better image of the singer to the public. There's no other objective. When we volunteer, we try to do it anonymously, not as someone's fan club, but just under the member's name. It's not about trying to show off our power as fans or just simply being noticed. We want others to like them too, simple as that", Kim said.

Agencies worked as fan club headquarters in the past, with long lines of fans waiting for announcements from managers and agency personnel in front of buildings. But now, they simply support fans with activities like fan meetings and cheering equipment like balloons and glow sticks for concerts.

"Each member (of Big Bang) has his own individual fan sites made by their fans. We also have `fan managers' in charge of all the work related to fans, from fan meetings to events, and they're usually the busiest people in the agency", Hwang Min-hee from YG Entertainment told The Korea Times.

"We try not to pinpoint a certain fan or fan site. We don't want to favor anyone and start a competition among fans. But yes, we know perfectly well how much these fans are putting their time and effort, and we are grateful", Hwang added.

"(The stars) become your life when you first start, usually during high school. For some, it becomes the motivation for everything, from studying to losing weight. For me, it has become a hobby. Something I'm very passionate and enjoy doing it and am always eager to talk about it", Kim said.

"Of course, we want to be noticed by Rain. Who doesn't? At the same time, it is also our way of releasing stress from our daily activities. Organizing a fan club involves hard work, but we don't really feel the pressure because it's for Rain. We're doing this mainly for fun", Espiritu said.

"Korean Fans Create Singular Culture"
by HanCinema is licensed under a Creative Commons Attribution-Share Alike 3.0 Unported License.
Based on a work from this source