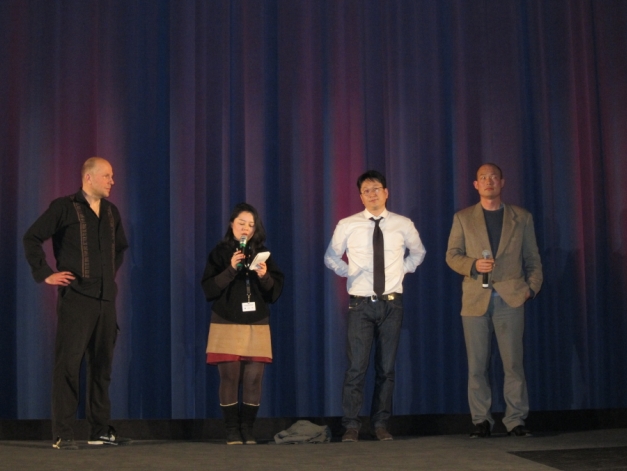 This year at the Berlinale, the Korean Film Council (KOFIC) held its annual Korean Film Night reception Feb. 13 at the Café Einstein in Berlin. Celebrating Korean cinema and the Korean films selected to the festival, the event was held in cooperation with the Busan International Film Festival (BIFF).

All the Korean directors invited to the festival were on hand to receive the spotlight: Kang Je-gyu - whose "My Way" is screening in the Berlinale Panorama, Lee Han - whose "Punch" is in the Generation 14plus section, Kim Joong-hyeon - whose "Choked" is in the Forum, Jeon Kyu-hwan– whose "From Seoul to Varanasi" is in the Panorama, and Lee Woo-jeong-I ("Ad Balloon") and KIM Souk-young ("Anesthesia") in the Berlinale Shorts competition. "From Seoul to Varanasi" lead actor Yoon Dong-hwan was also on hand.
A total of 450 guests attended the event, including the Ambassador of the Republic of Korea to Germany MOON Tae-young, the head of the Korea Culture Center in Germany Yoon Jong-seok, the head of the Venice film festival Alberto BARBERA, Locarno film festival hear Olivier PERE, Tokyo International Film Festival head Tom YODA, Cannes film festival Critics' Week director Charles THESSON, and head of the Berlinale Forum Christoph TERHECHTE.
Also on the bustling scene were heads and representatives from the Shanghai, Udine, Warsaw, Guanajuato, Munich, Copenhagen, Rio, Istanbul, Torino and Paris Cinema film festivals.
The business side of the film community was out in force as well, with representatives of the German distributor of "My Way" Splendid, the French distributor of"The Yellow Sea" Wild Side, Japanese distributor of "Breathless" Star Sands, UK Distributor of "Poetry" Arrow Entertainment, the French distributor of "The Chaser" Haut et Court, Spain distributor of "I Saw the Devil" Mediatres, UK distributor of "Arirang"Terracotta Distribution.