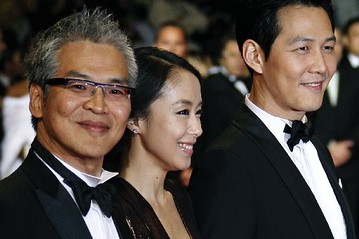 Director Im Sang-soo (L), accompanied by cast members Lee Jung-jae (R) and actress Jeon Do-yeon arrive on the red carpet for the screening of the film "The Housemaid - 2010" in competition during the 63rd Cannes Film Festival in Cannes May 14, 2010. Nineteen films compete for the prestigious Palme d'Or which will be awarded on May 23. (credit: WSJ)

We've already written here about "The Last Godfather" and "The Housemaid - 2010", but the article also speaks about "The Yellow Sea".

Journalist Soo-hyun Pae writes: "Another in the pipeline is "The Yellow Sea", an action thriller that tells the story of an ethnic Korean living in the Yanbian province of China. He was forced to cross the Yellow Sea to kill a man to repay his debt.

"Twentieth Century Fox became the first Hollywood studio to invest directly in a Korean film and is now discussing with the producer Popcorn Films on the film's release in North America.

"The film is currently playing in theaters in Korea and expected to have brought in more than two million viewers in total this week".

"The Yellow Sea" star Ha Jung-woo has been nominated for Best Actor at the upcoming Asian Film Awards, to be announced on March 21 in Hong Kong.