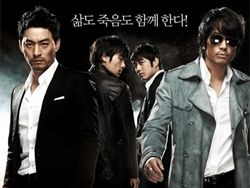 It's been confirmed! Two Korean films were invited to two big international film festivals this year!

The film, "A Better Tomorrow", starring some of the top Korean actors -- Joo Jin-mo, Song Seung-heon, Kim Kang-woo, and Jo Han-sun -- has been officially invited to the Venice International Film Festival. This is one of the biggest film festivals in the world and the Korean project will be proudly shown on September 2 at 10 PM (local time) for this year's 67th run (September 1-11).

The story is about two brothers who were separated and later meet as a cop and the leader of a drug and human trafficking gang. The action flick hits theatres in Korea on September 16th.

The film is a remake of "A Better Tomorrow, 1986", directed by John Woo. Oh was named this year's winner of the Venice International Film Festival's Life-Time Achievement Award. Thus "A Better Tomorrow" was invited as a retrospective on Oh's earlier piece.?

The San Sebastian International Film Festival is the biggest Spanish film festival and will be held from September 17-25th. The various award sections include the Gold Shell (given to the best project), Silver Shell (one given for best director, best starring actor, and the best starring actress), Judge's Pick, and the Filming Award.