Korean Films to See at Cannes 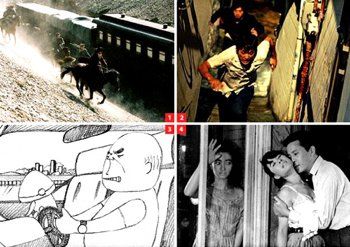 The world's premier film event, Festival de Cannes, will open for the 61st time May 14-25 in the southern French port city. While there are no Korean entrees this year in the main competition section, five films ― including the world premiere of the anticipated blockbuster "The Good, the Bad, the Weird" ― will shine in other sections of the festival.

"The Good, the Bad, the Weird", directed by Kim Jee-woon, will be shown in the Out of Competition section. This "oriental Western" features exciting horseback races and train rides in vast Mongolian plains.

The film will receive its own gala event, complete with a red carpet event. It is anticipated to be a big highlight along with the premiere of films like Woody Allen's "Vicky Christina Barcelona" and Steven Spielberg's "Indiana Jones and the Kingdom of the Crystal Skull".

Song will return to the red carpet after last year's feted "Secret Sunshine" while Lee comes back for the first time in three years since "Bittersweet Life". It will be a first for Jung.

Na Hong-jin's "The Chaser", is another movie that will be screened in the Out of Competition section. Directed by newcomer Na Hong-jin, the suspenseful serial murder story stars actor Ha Jung-woo, whom Martin Scorcese had once complimented as "having as much potential as Leonardo Dicaprio".

In the section Un Certain Regard, showcasing the latest notable works in world cinema, festival goers can see "TOKYO!" It's a joint project by Korea's director Bong Joon-ho ("The Host") and France's Michel Gondry ("Eternal Sunshine of the Spotless Mind") and Leos Carax ("Boy Meets Girl").

Up and coming Korean talent can also be seen at Cannes. Park Jae-wook will compete in Cinefondation, the competition section for students. Park is a senior at the Korean Academy of Film Arts, and presents "STOP", a short animation film.

In Cannes Classics, the black and white 1960 piece "The Housemaid - 1960" by the late director Kim Ki-young, will be shown. This section shows restored classic movies from around the world. The 60s are often called the Golden Age of Korean film history, and Kim is one of the most representative artists of his time. Last year, "Bound by Chastity Rule" (1962) by Shin Sang-ok was shown in the section.

The big movie event is also expected to bring more attention to Korean cinema through the film market.

"Korean Films to See at Cannes"
by HanCinema is licensed under a Creative Commons Attribution-Share Alike 3.0 Unported License.
Based on a work from this source