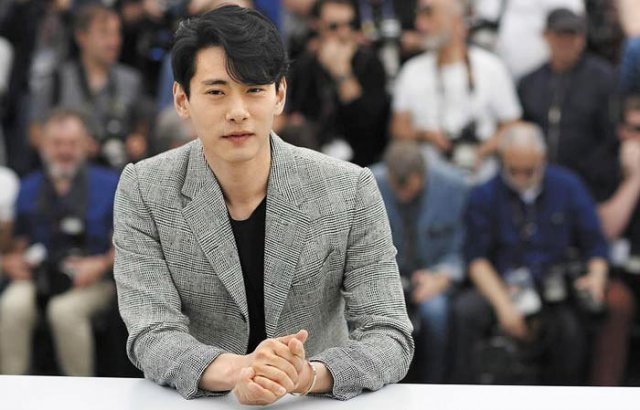 Actor Teo Yoo, a German of Korean parentage, is getting the spotlight with his lead role in the Russian film "Leto", which has been invited to the competition section of this year's Cannes Film Festival.

Yoo was born to a coalminer father and a nurse mother who went to Germany for a better life under an intergovernmental contract in the 1960s, and raised there. He began acting at the age of 20 when studying at a film institute in New York and continued his studies in Britain.

"I have always considered myself Korean", he said. He wanted to become an actor in Korea, but his Korean was not fluent enough. He worked at a vegetable store in Seoul to learn the language faster, while attending a private school for aspiring TV announcers to work on his pronunciation.

In "Leto" he plays legendary Russian rocker Viktor Tsoi (1962-1990), who was born to a Korean father and a Russian mother. Before this starring role, he had played only minors roles in several Korean and international projects.

The film is receiving rave reviews in Cannes. French film magazine Le Film français gave it 2.93 points out of four, the highest among films in the competition section screened as of Sunday.

To cast the role of Tsoi, director Kirill Serebrennikov checked the profiles of 2,000 actors from all over the world and auditioned 600. He recalled thinking, "This is it", when he met Yoo.

Yoo said he felt lucky. "To express the deep emotions in Tsoi's music, the actor had to be Korean. He also needed to be a new face who is not so famous, and speak fluent English. And he needed to look young because he was supposed to play the young Viktor. Luckily, I met the requirements", he said with a laugh.

"No matter what nationality I am, I look Korean after all. Until the early 2000s, young Asian male actors were restricted to minor roles in foreign films such as geeks with glasses. So I decided to work in Korea first and then expand my career to the world", he said. "I am at a major film festival now, but I don't want to get too excited about it. I will never forget who I was while working at a vegetable store searching for opportunities, and just do my best".

"Korean-German Actor Teo Yoo Gets Big Break in Cannes Hit"
by HanCinema is licensed under a Creative Commons Attribution-Share Alike 3.0 Unported License.
Based on a work from this source