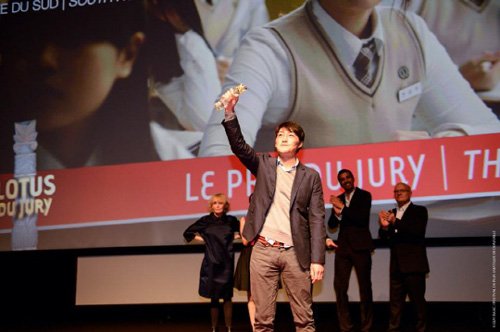 Director Lee Su-jin hoists his trophy after receiving the jury prize award at the Deauville Asian Film Festival in France on Monday. /Courtesy of Movie Collage

It won the jury prize, popular choice and international critique awards at the event, which ran from Wednesday to Sunday, the film's distributor Movie Collage said on Monday.

As the film was invited to the competition category and picked up three awards at what ranks as one of the most famous Asian film festivals in Europe, it has drawn much attention.

"Han Gong-ju" revolves around a high-school girl who loses everything and has to transfer to another school after being involved in a scandalous incident. The plot follows her attempts to overcome her trauma and move forward.

The film, which has appeared on the radar of numerous foreign film festivals, will hit local theaters in Seoul in April.

"Korean Indie Flick Sweeps Awards at French Film Festival"
by HanCinema is licensed under a Creative Commons Attribution-Share Alike 3.0 Unported License.
Based on a work from this source