Korean movie of the week "Man of Vendetta" 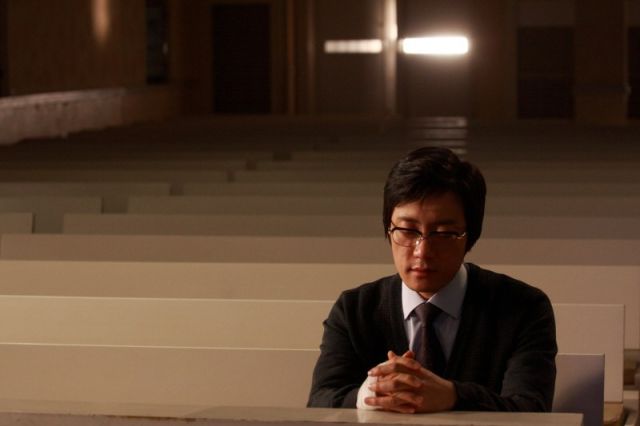 Previously known as "The Destroyed Man"
Synopsis
One day, Hye Lin, the five-year old daughter of a devoted pastor, Joo Yeong-soo, is kidnapped.  Pastor Joo, who has a rock solid faith in God at this time,  prays wholeheartedly for her safe comeback, but she does not return.  Eight years later, Joo Yeong-soo, who now does not believe in God and leads a completely secular life, receives a call.  Hye Lin is still alive and is with the kidnapper.  Joo Yeong-soo's  resolute attempt to rescue his daughter begins...

With his legendary acting, Kim Myung-min, together with Sol Kyung-gu and Song Kang-ho, has earned a solid place in Korea's movie district, Chungmuro, as one of its best actors. He has created sensational and convincing characters in every role he has taken. With his acceptance of the role in "Man of Vendetta", (Daisy Entertainment/Hancomm, Sponsors;  iFilm Corporation, Production;  Synergy, Marketing; Woo Min-ho, Director;  featuring Kim Myung-min, Uhm Ki-joon, Park Joo-mi) there is high expectation of yet another poignant transformation in his acting.

Yi Sun-shin in "Immortal Admiral Yi Sun-shin", Jang Joon-hyeok in "White Tower" and Maestro Kang  in "Beethoven Virus" -  these are some of Kim Myung-min's wide range of characters which he had made completely his own.  With these roles, thousand-faced Kim Myung-min has earned the praise and admiration of the general public.

Last year he showed the highest level of method acting, taking the role of Lou Gehrig's disease patient Baek Jong-woo, in "Closer to Heaven".  By choice he went through a painstaking diet to realistically portray the dying Baek Jong-woo.  He received the critics'  acclaim as well as moviegoers' enthusiastic approval, and was awarded Best Actor at both of the major motion picture awards in Korea (Daejong and Blue Dragon).  With this movie, he has irrefutably proven himself worthy of the big screen as well, following his previous success on television.  His being cast in "Man of Vendetta" in 2010, even before filming started, has attracted huge interest and attention of the media and public alike.

Uhm Ki-joon is cast in the role of Rudolf, a psychopath who is relentlessly pursued by Kim Myung-min. Uhm has proven himself a serious actor in musicals as well as in television dramas.  The role of Kim Myung-min's wife, Min Kyung, is played by Park Joo-mi, who starred in "Yeoin Chonha" (Women's Rule) eight years ago.  This will be her debut on the big screen.  She is expected to express painful, motherly love of a woman who loses her child to a criminal.

This movie is an exciting, hair-raising thriller, a story of breathtaking chases of a father who finds out that his daughter kidnapped 8 years ago, is alive.

Available on Blu-ray and from YESASIA, DVD and Instant from Amazon